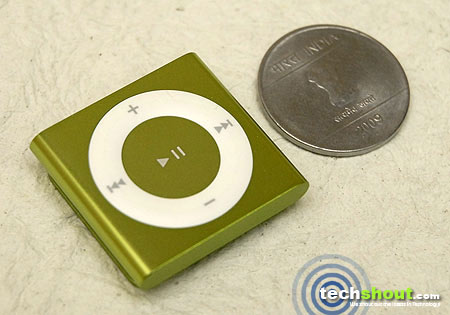 Let’s face it, one of the main reasons people think Apple devices are cool is because someone else thinks they’re cool. And someone else thinks they’re cool because Apple says they’re cool. But none can deny the fact that ‘iDevices’ are truly in a class of their own owing to a combination of inventive technology, aesthetics and good publicity flavored with a cheeky dash of snobbery. Remember how a lot of people were skeptical about the iPad with its lack of Flash support, camera and USB port? Did that stop the general populace from stampeding towards it as soon as it was launched? Apple’s done well with Mac, though it’s their portable players which may have a wider reach in markets across the globe. We’ve been waiting to review the fourth generation Apple iPod Shuffle ever since the company let it out of the bag back in September and review it we did.

The truth is that no one who’s a stranger to Apple products, if any exist, may actually be able to guess what they’ve got their hands on when presented with the iPod shuffle. This goes for the entire generations of iPod shuffle devices which have been churned out unfailingly on a yearly basis. None of them bear any resemblance to a music player. By just a single glimpse, we already have an idea as to why Apple keeps drawing out iterations of this player with alarming regularity. Though we’d like some stats on this angle, the 1.1” x 1.2” x 0.3” form factor probably leads to most of them ending up in ‘lost and found’. Therefore the need for fresh batches, and some new-fangled features while Apple’s at it anyway. The fourth generation Apple iPod Shuffle looks like a square shaped medal, unlike the previous generations and it comes in gleaming shades of silver, pink, blue, orange or green. When we recall the 2009 edition, it’s almost as if Apple is compensating for dropping 2GB worth of storage space as an option with a wider range of colors.

A user guide, a leaflet proclaiming the year-long warranty and a pair of earphones accompany the USB syncing and charging cable which comes bundled with this iPod member. Our inspection of the green colored player we held turned out the VoiceOver button, an on/off sliding lock mechanism, an earphone port, a minute so as to be almost invisible LED light and a clip on the rear. The on/off button can be pushed to one extreme for shuffling music or positioned in the center for playing out content in order. On the front face sits the rounded main navigation controls for tweaking the volume up or down, playing or pausing music as well as moving between tracks. The control to the right of the play/pause interface lets you progress to the next song and holding it down speeds it along in fast-forward mode. Sitting on the opposite side right across this bit is the control which enables you to restart a track, go back to the previous song and rewind.

The battery life is a high point of this device which has no LCD display eating into the power. It can actually go on for more than half a day and even limped along bravely for an hour after bleating the low battery status. It’s when you’re charging up the player you notice that it looks like a mere swelling at the end of the 4” cable it dangles from. Apple’s design heads have clearly been working to take the best out of previous generations and imbue these in the newest iteration. They’ve also thrown the obsolete and unpractical out of the window. The buttons are back, there’s multiple playlist support and the exterior borrows its design aesthetics from the second generation. We’ll wager our lunch money on the bet that most users didn’t think this new shuffle would be a bother in any way until they tried to get it clinging onto their apparel. The integrated clip for attaching the Apple iPod Shuffle to garments, arm bands or similar perches is not very obliging unless you press down on it persuasively. When you do so, the controls get bungled up and it’s back to fiddling for the right controls. 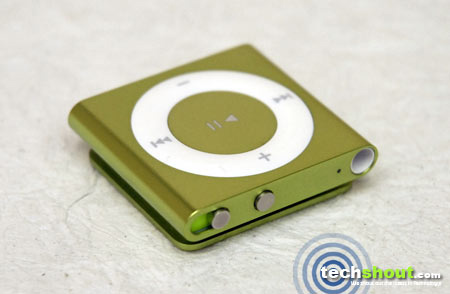 The functionality of the VoiceOver button is ingeniously simple; allowing you to hear the names of the song and artist being played with one press and rendering the battery status upon being provoked with two successive clicks. The playlists can be heard when the VoiceOver button is held down continuously and the play/pause button may be employed to pick a playlist while doing so. The male voice guiding us through the various functions sounded quite amiable and more than once, we caught ourselves directing casual remarks about the weather at the player. An option in iTunes allows the maximum volume level to be locked for whatever reason you may deem it necessary and playlists as well as audio books are given the ‘separate playlists’ treatment. The voice quality and volume levels belie the size and design of the earphones as also the device which belts out AAC, protected AAC, MP3, MP3 VBR, AIFF, WAV, Audible and Apple lossless numbers smoothly.

One question that ought to interest everyone is ‘Why has the Apple iPod Shuffle been put upon this earth?’ It’s obviously not your typical must-have for audiophiles with a fetish for chic players. Have you ever heard of a music lover with a 2GB light song library? What makes the shuffle starkly different from the nano is also its ESP. It doesn’t need to be controlled via a display and whole generations of people who are not finicky about the order in which their music is played have an answer. Picture yourself at the treadmill or lifting weights – do you really want to be bothered by a music player that calls on users to adjust the controls every now and then? It’s also one of the least expensive shuffle versions and offers less annoying companionship than that loquacious gym buddy. When it comes to the types of customers it attracts, we’re not discounting people who find music to be just one of the numerous pleasant pastimes either.

We enjoyed the company of the polyglot VoiceOver that offers easy access to the menu, battery level and track information.

Three cheers for whoever made the designers see sense and restore the button interface to all its former glory. A day will come when alternative options like voice or mind control can be tuned to perfection, but today is not that day.

Just like every other Apple device, the shuffle may blind you with its appearance. But it offers no pinching surface space that can stop you from messing up the controls while fastening it to your lapel or arm band like a shiny medal. Perhaps a function locking button is in order?

We want to see more storage space than the measly 2GB memory on this little player.

Based on functionality and looks, we’re giving the Apple iPod Shuffle an 8.8 out of 10 rating. When it boils down to the pricing, Rs. 3,200 may not seem like a creditable tag for 2GB worth of songs when you can get higher capacity music players at similar prices. What you’re shelling out the extra change for is the entire iTunes ecosystem enveloping it and the profits Apple needs to rake in, of course. R&D doesn’t come cheap and you can’t get a sleek body without some well engineered hardware for innards.