Portable media players are definitely in vogue these days. We think Apple reigns in this domain particularly as their devices always seem to mark their presence despite the crowd. Well this time it was Apple’s iPod Nano 4th Generation that held our attention for a few days. So in all its glory here’s a lowdown of the iPod Nano 8GB. 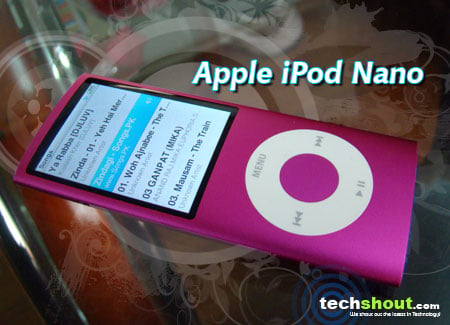 Officially announced around September 2008, the iPod Nano 8GB comes in a narrow shape quite unlike its 3rd generation predecessor. Comprising of a tilt sensor, novel Genius playlist tool as well as functions exclusively catering to the needs of the visually impaired, the improved iPod Nano is quite an impressive portable player.

Some of the features the media player boasts of include a 2 inch screen, built-in accelerometer that enables song shuffling as well as different display modes, improved user interface, voice recording feature that auto-starts on connecting an Apple-enabled microphone and new Genius tool that creates playlists based on a selected song.

About 3.6” x 1.5” x 0.2” in dimensions and 36.8 gms in weight, the new iPod Nano is recyclable and environment friendly too. It includes arsenic free glass and is also free from BFR, mercury and PVC.

Though the screen size of the fourth generation iPod nano is quite similar to its 3rd generation model, this time around it comes in a really neat shape. We think the screen can actually qualify as the most noticeable part of the player. The screen allows for easy scrolling of content and media viewing.

With a curved aluminum body that’s very sleek, the player is very comfortable to use and fits in well in the pocket as well as the hands. The surface also does not get scratched or dirty very easily.

What we think is the most interesting part of this player is its user interface. Apple has actually improved the interface of the iPod Nano to enhance its usability. The user interface complements the hardware well and ensures users a great experience with the player.

The next feature worth mentioning is the built-in accelerometer. With the same speed as the iPhone or iPod Touch when rotating to landscape mode, the Cover Flow View thanks to the accelerometer is also very smooth.

The interesting games actually managed to perk us up. The games are in fact quite identical to games found in the app store. We think the Vortex game in particular is very cool. It goes perfectly well with the feather touch sensitivity of the iPod nano.

The most enjoyable feature of the player we think is its video quality. Though the screen is small, you really won’t be disappointed when viewing your favourite sitcom or movies on the go.

A surprising fact is that while the player is stylish and loaded with advanced functionality, it sure does not burn a hole in your pocket. 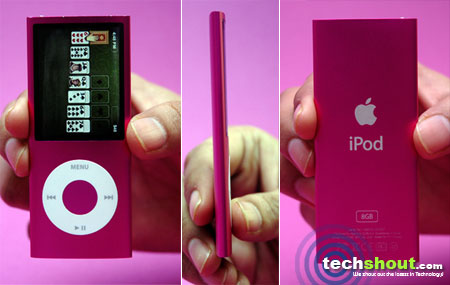 The volume of the headphone in the iPod Nano is not actually up to the mark. For audio files with a lot of background music, the bass actually gets quite louder than the treble which can make it quite annoying as you’ll no longer find yourself enjoying the music in a higher volume.

When out in the sun, the screen tends to glare which makes it quite disturbing when using the device outdoors.

Another annoying feature of the iPod Nano is that it gives no indication when shuffled by the shake technique. The user interface does not response in any way to let you know that the device has actually been shuffled. It also needs to be shaken really hard to get a response. Individuals who are not used to these devices can get really confused.

Also when synced to your computer, getting the initial settings if you already had iTunes synced to another Apple device can be quite a task.

Overall, the small-size factor of the 4th generation iPod Nano makes it fun to use enhances its portability too. A great companion to music lovers, we think the device definitely stands out in the crowd of portable media players being shelled out these days. If you have never used a portable player before then the iPod Nano is a great choice. From our end we’d give the iPod Nano a cool 8 out of 10.

The fourth generation iPod Nano wears eight shades namely silver, purple, blue, green, orange, yellow, pink, and black. Costing about 8,200 plus taxes, the iPod Nano is worth every penny and is certain to keep you entertained.