Foursquare in its revamped avatar is here, more personalized that before

With the strong determination of providing Yelp with some healthy competition, Foursquare has re-launched both its Android and iOS apps, equipped with more personalized features. A new logo and design have also been granted to the service to mark a major detour from what the app was being used for hitherto.

With its focus set on providing users with a customized list of places to visit, the new Foursquare learns from your habits. For instance, if you happen to love a particular brand of ice cream, the app will notify you whenever you’re nearby a store that sells it. 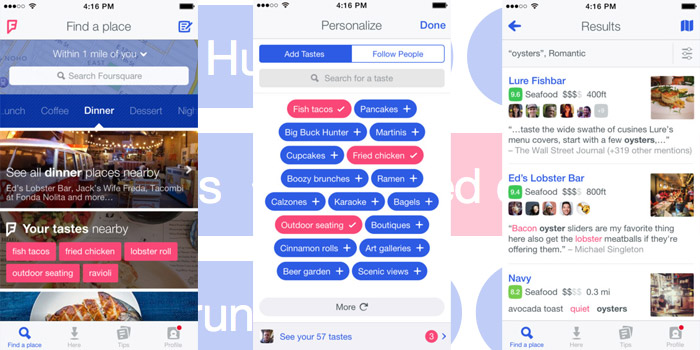 And that’s just one of the many different ways Foursquare can prove useful to you. Its flexible search feature now lets you search for specific words like outdoor seating, books and arcades to let you know about the nearest places where you can find them.

Also Read: Foursquare is splitting its app into two, meet the other half Swarm

As most know, this service had started off as a location-based social networking website back in 2009, and since then it has received 6 billion check-ins from all over the world. But the app has now grown to provide a huge number of other features as well, which is why check-ins and social interactions have been moved to another utility from the company, named Swarm which is live now for Android and iOS devices.

Have a look at the video in the space above to know how the new Foursquare works. Here’s the link to download its Android version and this is where you can grab its iOS variant from.