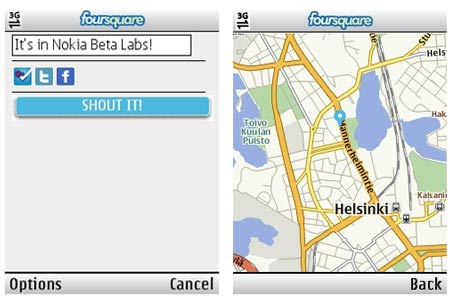 After enabling users with GPS-enabled mobile devices to connect with friends and update their location, Foursquare has strung out its field of vision. The location-based service has now been made available to users who own S40-powered phones, reveals Nokia Conversations.

The new version of Foursquare is created in Java and functions on most Series 40 Nokia mobile phones. By taking advantage of the service and the device’s built-in GPS, users will be enabled to tell their friends where they are. For users who have a Series 40 phone without GPS built-in, a new feature has been rolled out where a particular location will be calculated using the cell-id information from their network to provide an estimated location.

In addition to this, the application now allows users to add a location to their status update on Facebook or Twitter. Checking into places offers special rewards further. Though in Nokia Beta Labs, the app for S40 features the ability to add place, manage friend requests and search places.