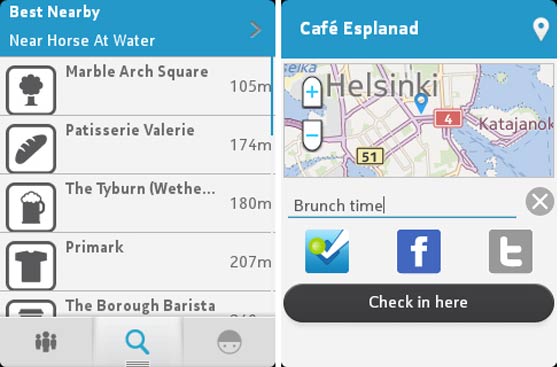 Foursquare has spread its wings even wider, with its official app now having been made available for all devices that employ the Nokia S40 OS, including the fresh lineup of Asha phones. According to the developers of Foursquare, ‘hundreds of millions of people’ from around the world make use of this operating system, and even they will now be able indulge in the check-in-based social networking service.

Moreover, the makers of the app have struck up some kind of a new partnership with Nokia it seems. It has been revealed that the application will soon be made available in the form of a preloaded utility with ‘a bunch of new Asha devices’ which are to go on sale in a few months. Deliberately or not, this indeed goes on to disclose that more new phones from the range are to be released soon.

As far as current phones are concerned, a large number of them feature the S40 OS, and hence there’s a question as to whether this app will be able to run on those which do not include GPS in their attributes. To get an answer on this query, Engadget contacted both Foursquare and Nokia, and it was quick to receive a replay from the latter. The Finnish giant confirmed that the app does not mandate GPS to be present on S40 phones to be able to work.

Having debuted in 2009, the Foursquare service boasts of a large community worldwide, with over 20 million registered users employing its benefits. It basically asks one to one ‘check in’ at venues they’re visiting by using the web utility, text messaging or a device-specific app, and each such check-in results in points being doled out to them, eventually resulting in users indulging in other activities like earning badges, becoming mayors of particular places and more.

The Foursquare app for S40 devices is now live on the Nokia store, and can be downloaded onto applicable phones.