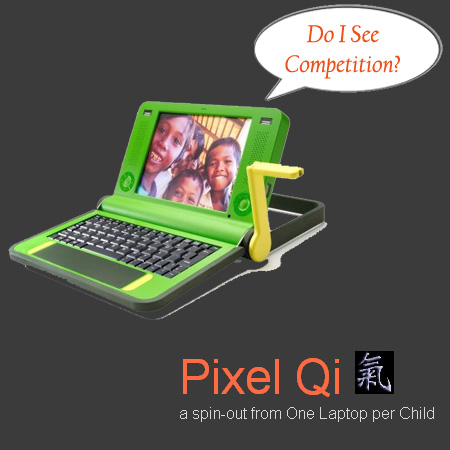 OLPC project’s former Chief Technology Officer has rolled out a new company named “Pixel Qi.” So what’s the target of this newly founded company? Well it is to come up with a $75 laptop.

Mary Lou Jepsen, OLPC’s former CTO was the real one behind the innovative sunlight-readable display and also played a vital role in the development of several power saving features in the device.

On her website, Jepsen – Pizel Qi’s CEO and CTO wrote: “I believe that looking at computers in a new, holistic, systemic way, with a clean-sheet approach to computer design — rather than incrementally increasing the horsepower of the CPU — is critical to bringing computing and Internet access to more than the one billion affluent who now are its beneficiaries. The key is a new generation of low-cost, low power, durable, networked computers, leveraging open-design principles.”

Well, $75 surely seems a very small amount to make a complex device like a laptop. However as they say “nothing is impossible” so could this dream be! In fact the XO laptop too which initially claimed to roll out at only $100, went up to $188 finally. Let’s hope Pixel Qi’s product doesn’t follow suite.

Well speaking about the OLPC laptop, just last week we reported that the XO will no longer incorporate Intel chips.

What can we say, let’s hope the best man device win!