Word out on the street is that while Motorola is working on a trio of Droid smartphones for Verizon, there might also be a fourth one under development which will be called the Droid Turbo. Specifications of this new handset have been posted online and they are sure to make you drool.

Android Authority was provided with a couple of screenshots by an anonymous source and they happen to be taken from the alleged smartphone. The tipster has even mentioned that the device would be called the Motorola Droid Turbo, but there’s no proof of that in the images which show the CPU-Z app running, with key specs of the device displayed. 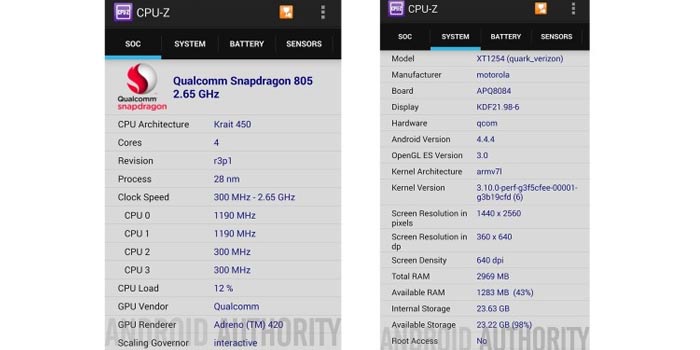 As can be seen in the pictures, the Motorola Droid Turbo will be powered by a Snapdragon 805 processor which would make it the fastest in the new lineup, as other handsets including the Moto X+1 will be fueled by Snapdragon 801 chips. Android 4.4.4 KitKat will be preloaded and there will be 3GB of RAM as well as 32GB of storage onboard. Moreover, the phone will carry a 2560 x 1440 pixel panel with 360 x 640 DPI.

Based on that information, this display will be approximately 4.59 inches in size, which is pretty strange. That’s because 2K visuals on such a small screen would be pointless as even devices as large as 5.5 inches can’t make the most of such high resolutions. Additionally, the smartphone is said to feature a 20MP rear camera and a 2MP front snapper.

Those are all the details we have on the Motorola Droid Turbo for now. The source has mentioned that the device has also been listed on the Bluetooth SIG website which means that it indeed exists.