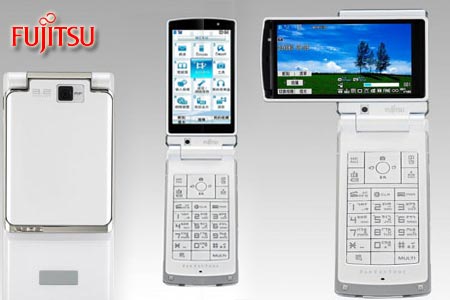 The most recent phone to catch the fantasy of mobile phone users in Taiwan is the Foma F905i. An announcement by NTT DOCOMO and Fujitsu reveals that the two companies have joined hands to release this novel phone for the Taiwanese market.

The Foma F905i is packed with a 3.2-inch full-wide VGA two-position display and a 3.2-megapixel camera. While the screen has a 480×864 resolution, the phone also sports a fingerprint scanner for security normally found in PCs. The handset’s battery should last around 3 hours 20 minutes on using it in 3G GSM networks and 505 hours in the standby mode.

The mobile also incorporates some of Fujitsu’s signature technologies that are known to offer clear sound and voice reproduction. The technologies will also ensure sound is delivered at 30% slower speed so that it is easily understood. Users can also use the Foma F905i to view and input the Traditional Chinese character set along with the regular writing system in Taiwan. The phone also allows gives users access to the FET’s i-mode which is a mobile Internet service in the local language.

Originally launched in Japan, the F905i has now been officially launched in Taiwan by Far EasTone Telecommunications. The phone is in fact the first joint venture of DOCOMO and Fujitsu targeting users outside of Japan.