Focus on the user bookmarklet says, ‘Google, don’t be evil’ 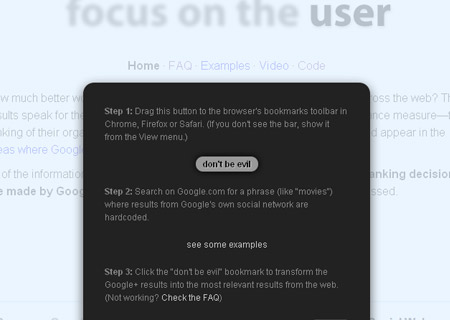 Set to correct a particular Mountain View-based company’s so called ‘misdeeds,’ the engineers at Facebook, Twitter and Myspace seem to have taken matters into their own hands through the Focus on the user tool. This issue surfaced after the launch of Google’s ‘Search Plus Your World’ transformation, which apparently displays more Google+ posts than content from various other social networks.

For those who aren’t too happy with Google’s latest changes, the jointly developed bookmarklet is most likely to derive search results without prioritizing the company’s own social pages. To access the tool, users can click on the ‘Try a more relevant Google’ button from the focusontheuser.org website and further drag the ‘don’t be evil’ option into the bookmark toolbar of Chrome, Firefox or Safari browsers. After searching for any phrase that is hardcoded on Google’s own social network, users can then click on the newly added bookmarklet and acquire the desired results. 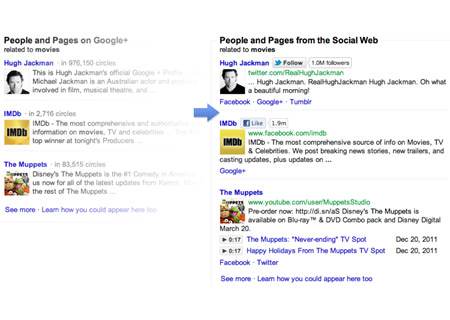 A post on the website reads as, “When you search for ‘cooking’ today, Google decides that renowned chef Jamie Oliver is a relevant social result. That makes sense. But rather than linking to Jamie’s Twitter profile, which is updated daily, Google links to his Google+ profile, which was last updated nearly two months ago. Is Google’s relevance algorithm simply misguided?”

The ‘Search Plus Your World’ transformation was rolled out earlier this month. Through this, the main objective for Google was to deliver personal results with content like images and posts from social networks as well as various pages and profiles of users via its search engine. However, the outcome of this implementation apparently leads to more Google+ related results surfacing than those from other websites like Flickr, Twitter, Facebook, LinkedIn, MySpace, Quora, Tumblr and Foursquare.