Flipkart, currently the most popular e-retail website in India, has revealed that its Android app now comes with support for Android Wear smartwatches. This means owners of the wearable products will be able to view content from the website right on their wrists, rather than having to view it on their smartphones.

At the moment, the number of functions that can be controlled through Android Wear smartwatches are quite limited, but Flipkart has made it clear that additional features are on their way through future updates. Owners of these gadgets don’t need to do anything apart from installing the site’s official app on their Android smartphones. 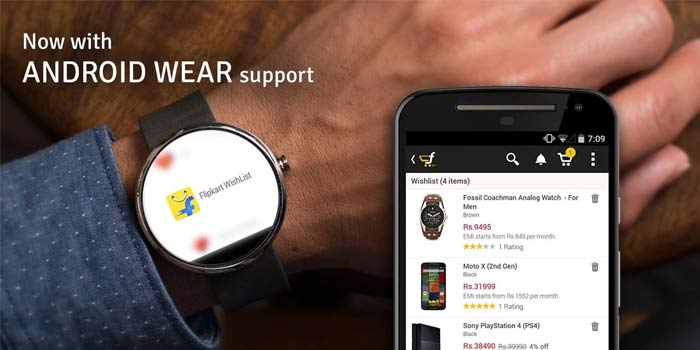 The connected wearable will then automatically install the Flipkart Android Wear version on its system, to let you access it easily. Your Wishlist on the e-commerce site will be available for viewing on the small screens of the smartwatches, while you’ll also be able to access push notifications.

It has been made clear by Flipkart that all-important features like order tracking, price drop notifications and personalized offer notifications will also be introduced to the Android Wear version of its app soon. Right now, the original app for the e-retail site can be downloaded on Android, iOS as well as Windows Phone devices.

Also Read: Google Nexus 6 gets listed on Flipkart even before Play store arrival

Today also marked the restocking of the Moto 360 Android Wear smartwatch on Flipkart. The Motorola device was released through the site last month, and while just its silver version was available for purchase back then, it can now even be bought in the form of its black model as well.

Like we said, Flipkart’s Android Wear app will automatically start working on your smartwatch once you install it on your connected smartphone.