India’s most popular e-retail website Flipkart has some more big numbers to boast of, as the milestone of 2.5 million Motorola smartphones having been sold in India has just been breached by the company. It has taken just 9 months for both the parties to achieve this feat, which is quite surprising.

That’s because Motorola only has a nine-month presence in the country since its reentry into the Indian market earlier this year. It began is journey by launching the first-gen Moto G which created a huge impact on the local smartphone market owing to its top-notch features which were being offered at a reasonable price. 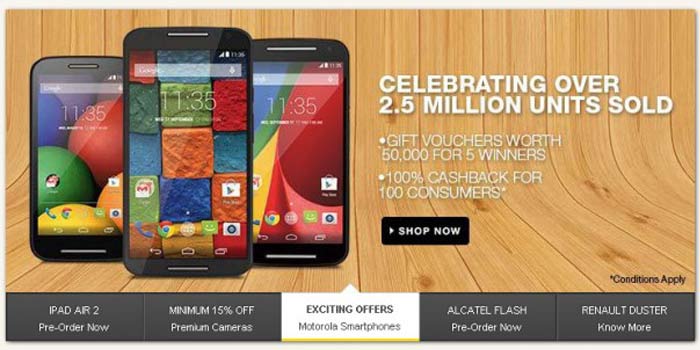 Motorola’s ownership just changed hands, and it’s now being parented by Chinese giant, Lenovo. It has been made clear however, that the shift in power will have no immediate effects on the way both the companies function, so it’s safe to say that Motorola will continue to sell its devices in the country.

The manufacturer has partnered with Flipkart in India to make it the sole seller of its products in the nation. In a way, this was first such partnership in the country, which later went on to trigger one of the hottest trends this year.

Motorola is currently selling five smartphones in India, with the best-selling ones among them being the 1st and 2nd gen Moto G devices and the Moto E. The old and new Moto X handsets too have been made available here, but they’ve failed to appeal to the masses as effectively as the other three have owing to their costs.

Flipkart and Motorola look to be in no mood to end their partnership, so we can expect more of the manufacturer’s handsets being made available through the e-commerce in the near future.