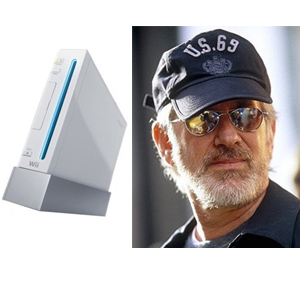 The two things most women love is blowing up things and of course keeping a check on those inches. Now all they need is a Wii to meet both these ends.

Nintendo has rolled out the “Fit” exercise pad that keeps a check on the gamers’ health, challenging them to sweat it out.

The other addition is the latest “Boom Blox” game, which has been developed by Electronic Arts exclusively for the Wii platform. And none other but the man himself – Steven Spielberg has put in his expertise along with EA developer Amir Rahimi for the development of this title.

An ecstatic Rahimi said, “Personally it was a dream come true to work with Steven Spielberg and he did an amazing job to bring his innate ability to understand people to the video game space.”

In “Boom Blox”, players have to knock stuff around in a way that’s mainly pleasing, with the help of the Wii’s motion controls. All the blowing up and toppling conveys a sense of real-life physics at work.

But, alas the most important that stands true is that to play these Wii games what’s most important is the console itself, whose supply has more than often not been able to meet the demand.

Speaking about this, Cammie Dunaway of Nintendo of America said, “We’ve seen the inventory start to improve over the last few weeks.” Adding, “We continue to be committed to getting as many into the marketplace as we can.”

Slated for a May launch, the Wii “Fit” will be priced under $100, according to Nintendo. The action/puzzle title “Boom Blox” will be shipped to stores on May 6 and will be available for around $50.