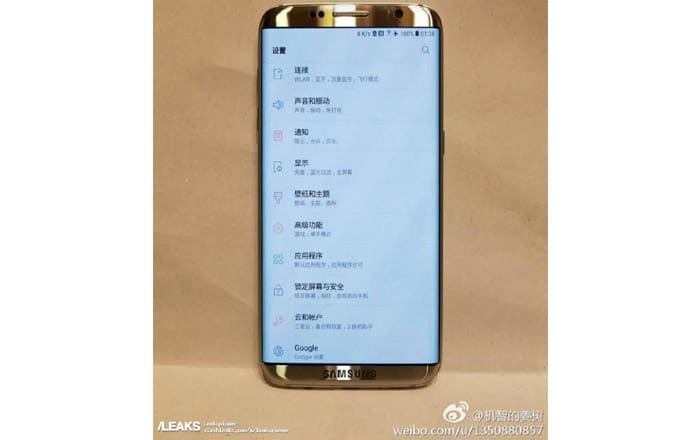 An alleged photo of the Galaxy S8 has begun doing the rounds on the internet, offering the first proper glimpse at could turn out to be Samsung’s next flagship phone. The Weibo leak falls in line with previous rumors which had asserted that the handset would not feature a home button, sport a dual-edge curved display, and show off a narrow bezel design.

Moreover, the image in question appears to be that of the China model of the Galaxy S8. The smartphone is reportedly being tested in the nation right now, so there is a chance of leaks emerging at this time. The device depicted doesn’t seem to be diverting massively from Samsung current style either.

However, the fact that it looks similar to Samsung’s current flagship sheds some doubt on the snap’s authenticity. An intrepid Photoshop user may have just adjusted the look of the Galaxy S7 Edge to produce a convincing-looking fake.

GSMArena points out that there are some questionable artifacts in the top left and right corners of the panel. There’s also the fact that there don’t appear to be any on-screen keys visible. One possible explanation for this could be that the capacitive buttons were hidden when the photo was being clicked.

Furthermore, the keys might be located on either side of the Samsung logo along the bottom of the smartphone and were not lit up at the time. Given the uncertainty surrounding the image, it should be taken with a pinch of salt up until more evidence emerges in due course.