As we reported a few days back, the Nokia name has finally been omitted from Microsoft’s future plans and we’re now seeing that being implemented with the first device carrying the software company’s branding onboard. The RM-1090 has made its way through TENNA and someone has posted images of the phone online.

TENNA is China’s equivalent of the FCC and the regulatory usually publishes specs and images of each device it certifies online. Sadly, no such details of the RM-1090 have been revealed. Instead, a Weibo user has done the needful and this means that we’ve got nothing official on the hardware from the certification website. 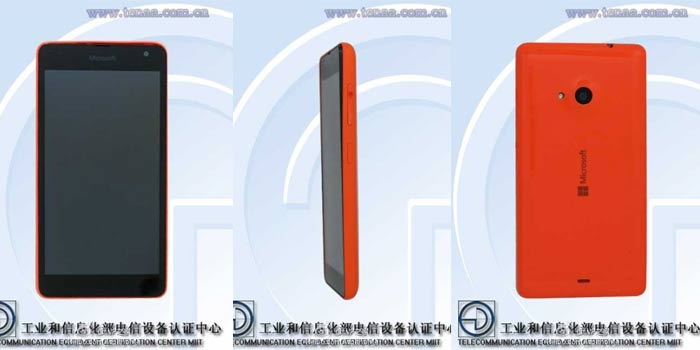 As you can see in the image above, the phone will have a very basic design. The Microsoft logo can be seen centered on the rear and on the front above the display. This basically means that the Redmond giant might not be planning to use the Lumia or Windows branding on its devices.

Also read: Microsoft Band fitness tracker comes to the US today, priced at $199

A small amount of information is available since the phone Microsoft RM-1090 did pass through the FCC last month, notes Windows Central. What we know so far is that the device will be of similar size to the Lumia 830 and will probably carry a 5-inch panel. It’s confirmed to offer visuals at qHD resolution with a pixel density of 220ppi.

Additionally, there will be dual SIM support and HSPA connectivity onboard. That’s all the info we’ve got on the handset so far. It looks to be an entry-level one, probably an upgraded version of the Lumia 530, anyone interested in a Lumia 535? It’s also good to see that Microsoft is using the same numbering policy from Nokia, putting in the same room as Vertu (formerly owned by Nokia).

It isn’t likely to be a long wait for the Microsoft RM-1090 to go official, so check back soon for an update.