Have your first look at the Samsung Galaxy Gear smartwatch

The wait until September 4 to finally witness the Samsung Galaxy Gear just got a bit easier to handle, for pictures of the device’s alleged prototype have managed leak out. Apart from the way it looks, a lot about how it works has also been revealed. Equipped with a 3-inch display, this smartwatch even kicks in a camera and built-in speakers of its own, and is said to work in tandem with Samsung’s S family of Galaxy devices.

Venture Beat’s Christina Farr got a look at the Samsung Galaxy Gear smartwatch, and has pointed out that the final appearance of the product could be a lot different since it’s only a prototype. It’s being said that the device will be marketed by Sammy as a health-focused product, particularly due to the fact that it possesses heart-rate and calorie monitors. The smartwatch will even come pre-installed with Samsung’s S Voice utility and a few health apps as well. 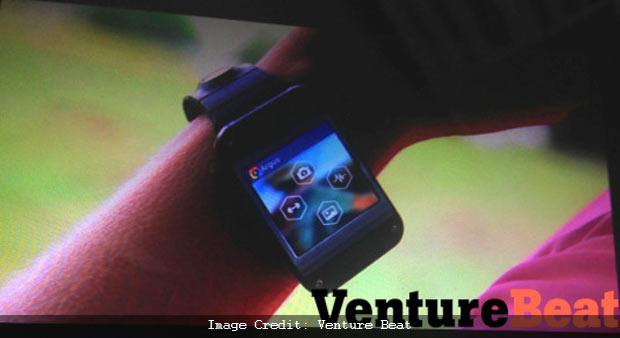 It will house a 4MP camera on its strap which will enable you to take pictures of your food and tag them with whatever health data you wish to associate it with. But that’s is not all; the device will also act as a smartphone companion which will allow you to perform tasks such as checking your call logs without even touching your phones, utilizing social media and more. It kicks in more than 10 hours worth of battery life apparently.

All things official will be finally revealed by Samsung on September 4, so stay tuned. We’ll bring you all the latest from IFA which is set to witness other big launches as well, like the Note 3, the Sony Xperia Z1 and the HTC One Max.