The Moto G has received a successor, but its 4G LTE model hasn’t. AT&T will hence be seen selling the old device in the US from October 10 onwards. This 4G variant was released in June this year, and has since been selling in unlocked form on Amazon.

Motorola’s ultra-affordable mid ranger, the Moto G was outed in November last year, and it quickly managed to impress everyone with its offerings. The two things it was missing however, was LTE support and microSD expandability. So in June, the Moto G 4G LTE was launched, making it a more complete offering. 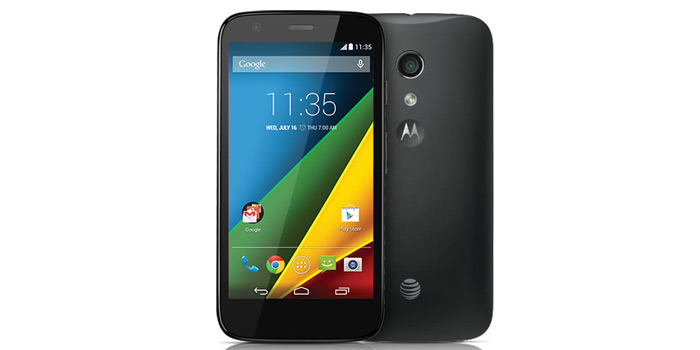 AT&T is late to the party, but has nonetheless decided to offer the phone now at $180 off-contract. With a one-year agreement, the price goes down to $79.99, while the AT&T Next plans will fetch you the device for $7.50 per month or $9 per month for 18 and 12 months, respectively.

It was only last month that we saw the release of the Moto G’s successor in the form of the second-gen model. This version grabs a bigger display, front-facing stereo speakers, a better camera and microSD support, but still does not feature 4G LTE connectivity as it’s mostly aimed at emerging markets.

Here’s a look at what the first-gen Moto G with 4G LTE tags with it:

Like we said, the AT&T model of the Moto G 4G LTE will be released by the carrier on October 10 through its online and offline channels.

Facebook
Twitter
Pinterest
Linkedin
ReddIt
Tumblr
Flip
Previous articleXiaomi’s Mi 3 goes on sale in India for the last time, few chances of you getting it
Next articleBlackBerry Passport bearing a gold frame looks gorgeous as hell