Tech giant Microsoft certainly made a bold play for the gaming market in India recently, and we’re not just talking about the launch of the Xbox 360. Of course, this is the first time ever that the gaming console has been officially released in India and so it is a big deal. But what most people may actually have had their eyes on was a certain ‘novelty factor’ in the form of the first Indian Booth Babes.

At the unveiling of the Xbox 360 in the capital city of Delhi, the media had their cameras clicking away madly at the distraction that was a group of four girls clad in cropped tops and tight miniskirts, with Microsoft branding stamped over their clothes. It was like a different version of E3 or Tokyo Game Show had come to India. As you can see, we were at the launch and have captured this ‘historic’ event on camera as proof. 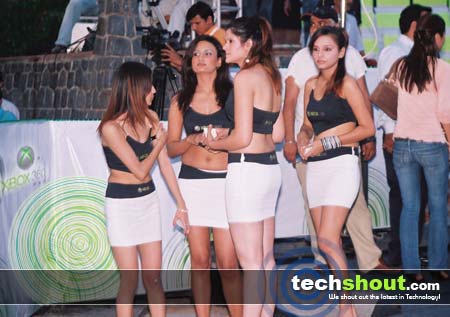 It’s curious that companies like Microsoft are playing up the ‘babes and video games’ angle while promoting their products. It sends out a clear message about brands being fully invested only in the male consumer. But you can hardly blame them at this point of time seeing as more boys than girls seem to be showing interest in gaming. Maybe things will change in the future and companies will cater to a wider audience then.

India and China are considered to be the biggest potential gaming markets in the world mainly because there’s plenty of space to grow. So we are bound to see more gorgeous booth babes at opening events such as this one. The prices of the Xbox 360 Premium and Core versions start at Rs 23990 and Rs 19990, respectively.