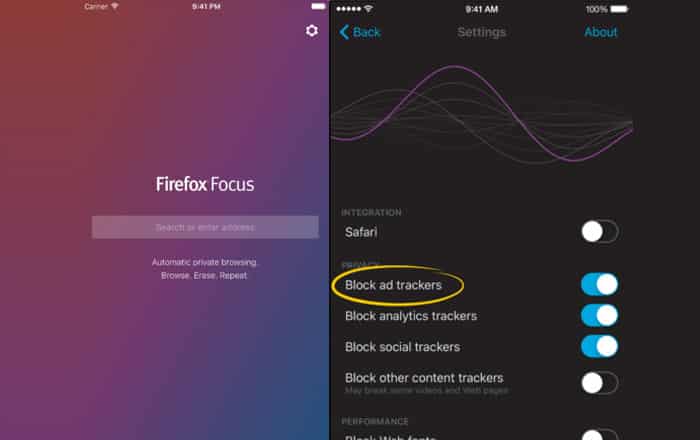 Firefox has launched an intriguing new app for iOS dubbed Focus which concentrates on privacy above all else. The browser operates only in a sort-of incognito mode, refusing to save any of your search history.

Firefox Focus doesn’t save passwords or cookies either. The browser is being touted as a next-level privacy tool which is always on-guard against any sort of snooping. It automatically blocks a number of web trackers and pop-ups so ads can’t spy on you or follow you around.

A number of websites load slowly on mobile as a result of trackers and additional data. By actively blocking such sites from observing your behavior, Firefox claims its app will deliver a performance boost in terms of speed. For pages which absolutely require tracking, the application allows you to open it in the regular Firefox app or Safari.

Also See: Firefox for iOS is now faster and won’t drain your battery

Once you’re done with browsing, you just have to hit the Erase button located at the end of address bar to get rid of all your activity. It doesn’t allow you to open multiple tabs and it doesn’t have any menus either. The simple UI is probably its greatest strength, though there will be many who would prefer the multitasking ease of having multiple private tabs open.

Interestingly, Firefox lets you integrate Focus with Safari as a content blocker. You’ll be able to utilize its tracking protection across both browsers as well. You can download the former via the App Store. The company hasn’t mentioned whether or not it’ll make its way to Android soon.