Mozilla has begun testing an interesting new feature dubbed Containers which allows people to log into the same site in Firefox using two different accounts simultaneously. This potentially time-saving feature is currently being experimented with in version 50 of Firefox Nightly.

Firefox’s Containers could solve a long-standing dilemma for users who have multiple accounts. So far, consumers have been forced to either use two separate browsers or open a private window in order to log into separate accounts for something like email. However, the first option involves constantly switching between two browsers and the second doesn’t save any login information.

Containers does away with all this fuss by allowing individuals to open tabs in different contexts namely Personal, Work, Banking and Shopping. Each has its own cookies, indexeddb, localStorage and cache. This basically means that a person’s activities in one tab does not crossover into another, so they can log into their personal Twitter account in one and their work Twitter account in the other. 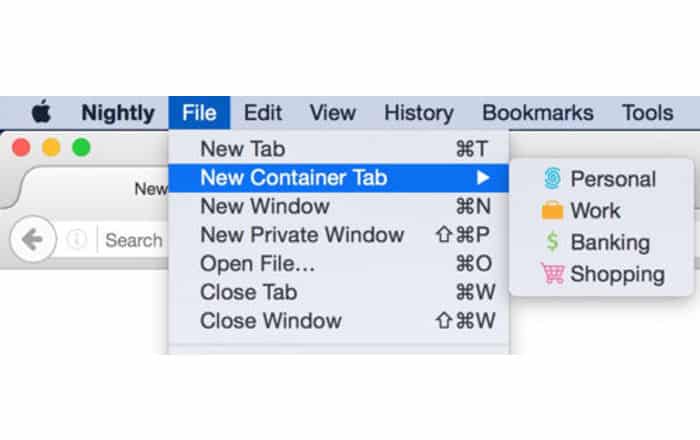 The addition of Containers in Firefox also solves the problem of tracking to a certain extent, since the things a person shops for in the Shopping tab won’t affect their Work tab. The new tool can be accessed by heading to the File Menu and picking New Container Tab. Each context has its own color and icon so consumers can easily make out the difference between them.

Users can open as many tabs as they like at the same time. Containers are also present in the hamburger menu. Firefox is working on adding more access points for the tool such as opening it via a long-press of the plus button. Note that this is an experimental feature in Nightly only. Mozilla is currently collecting feedback before it forges ahead with making it available in the regular browser.

You can try out Containers now by downloading Firefox Nightly here.