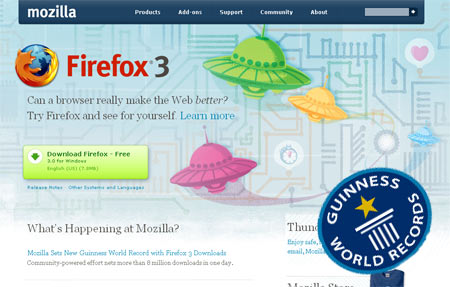 Firefox 3 should be called as one of the most successful browser releases ever. As many as, 8,002,530 downloads were recorded on the day of the launch of the updated browser! Taking this huge number into consideration, Guinness World Record has certified the Firefox 3 for as the highest downloads record in 24 hours ever. Hence Mozilla Firefox has secured its place in the Guinness Book of World Records.

“As the arbiter and recorder of the world’s amazing facts, Guinness World Records is pleased to add Mozilla’s achievement to our archives,” said Gareth Deaves, Records Manager for Guinness World Records. “Mobilizing over 8 million internet users within 24 hours is an extremely impressive accomplishment and we would like to congratulate the Mozilla community for their hard work and dedication.”

On the occasion of the celebrating the certification of the Firefox 3 by the Guinness Book, Paul Kim, VP of Marketing at Mozilla said, “The enthusiasm and creativity of Firefox fans was instrumental in achieving this record. Our community members came together and not only spread the word, but also took the initiative to help mobilize millions of people to demonstrate their belief that Firefox gives people the best possible online experience.”

Firefox 3 browser was launched on June 18, 2008. The latest browser is available in more than 50 languages and it is claimed to be three times faster than Firefox 2.