LG has shown a lot of focus towards new types of innovation, but it hasn’t forgotten the past. With the Optimus F3Q smartphone that’s destined for launch on T-Mobile, the company is looking to keep the QWERTY segment alive for a bit longer in the Android ecosystem.

Physical keyboards on handsets aren’t quite popular now, but they are still in demand, well at least BlackBerry and a few other companies seem to think so, LG included. The new model from the South Korean conglomerate first appeared when a mockup probably pulled from a manual, was leaked online. And now, a new image of the LG Optimus F3Q has surfaced through EvLeaks flaunting the handset’s final design. 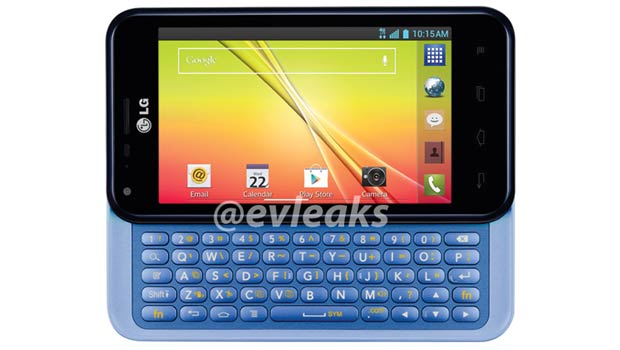 The device will have a slide-out QWERTY form factor where the keyboard will have four rows and dedicated function keys such as back, home and menu amongst others. The leakster has also been kind enough to provide specifications for the Optimus F3Q. And just as we speculated in the previous report, the handset is merely a modified version of the Optimus F3 which was launched last year and it features the same specs as the original.

The smartphone will be powered by Android 4.1.2 Jelly Bean and isn’t likely to be further upgraded. The display fitted here measures 4 inches wide and it proffers visuals in WVGA resolution. There’s a 5MP camera on the rear, while a 1.2GHz dual core processor will deliver the steam from the inside. The handset will also feature a 2460mAh battery and 4G LTE connectivity which is a standard feature on all F series handsets.

No price or release date has been provided for the Optimums F3Q, but you can expect it to be highly affordable.