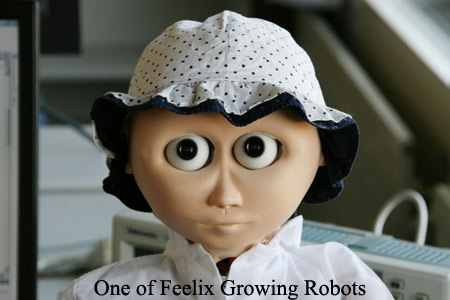 Looks like the time when one would have a personal robot as a best friend and a confidant is not very far. European scientists are on their way of developing a robot that will detect the human expressions like being sad, happy or angry.

The robots will be made able enough to respond in a way suited to the aforementioned state of people, learning from its experience. No you aren’t reading a sci-fi movie’s script. This is for real.

Feelix Growing Project, a project that is being worked upon by the 25 European robotic experts from six countries, will be developing robots with humanly emotions. Are you wondering how will the robot ‘learn from its experience’? The answer is – artificial neural networks.

“If someone shows fear or cries out in pain, the robot may learn to change its behaviour to appear less threatening, backing away if necessary. If someone cries out in happiness, it may even detect the difference, and one day fine-tune its responses to individuals,” said Dr Lola Canamero. “It’s mostly behavioural and contact feedback. Tactile feedback and emotional feedback through positive reinforcement, such as kind words, nice behaviour or helping the robot do something if it is stuck,” she told BBC.

The robot’s neural network will consist of cameras and sensors that will help it detect the emotions. The robots are still under development with the help of research in robotics, adaptive systems, developmental and comparative psychology, neuroscience, and ethology which may one day make the Feelix Growing robots a part of our daily life.