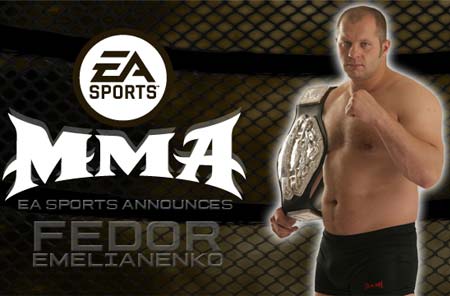 Gamers will have to brace themselves for the arrival of the heavyweight champions. Electronic Arts reveals that the EA Sports MMA fighter roster will feature Fedor Emelianenko as its headline. He is claimed to be the world’s acme ranked MMA heavyweight.

The top ranker will join the likes of Renato Sobral and Gegard Mousasi along with many other fighters. They all will feature in the game called EA Sports MMA which includes the deadly fury of mixed martial arts. Both these fighters will take part in the Strikeforce fight in the title bout on August 15th.

Emelianenko commented, “I have fought all over the world and I am excited to be in EA Sports MMA because this game is going to show the global appeal of mixed martial arts. I know MMA fans have been wanting to play as me and pitting me against any opponent. Now they will have their opportunity.”

Fedor is a Russian heavyweight mixed martial arts fighter who weighs 231 pounds and is 6’0”. He is an expert in the art of Judo and Sambo and possesses a 30-1 record. He is also the present WAMMA Heavyweight champion as he defeating Andrei Arlovski who is the former UFC Heavyweight Champion to defend his title.

Executive Producer Dale Jackson explained, “I am very excited to have Fedor, the number one heavyweight in the world, as one of the top fighters in EA SPORTS MMA. He is one of the elite fighters in the sport today and will provide the ultimate competition for our gamers. The EA SPORTS MMA team at Tiburon has been working on the game for over a year already and we will have a lot more great fighters and other exciting news to talk about soon.”

Gegard Mousasi won his latest match in Dream 9 when pitted against Mark Hunt in May. This fighter holds a current record of 25-2-1 and is a former Dream Middleweight champion as well. The Dutch-Armenian fighter weighs 185 pounds and is 6’1” in height. He will be faced against Sobral as they battle to find out who will walk away with the Strikeforce Light Heavyweight championship title. Gegard has a fighting style that incorporates a deadly concoction of Judo and Dutch kickboxing.

The Brazilian fighter known as Sobral possesses great grappling prowess, aggressive style and high-caliber submissions. He has a record of 35-8 and is the present Strikeforce Light Heavyweight champion. At the Affliction: Day of Reckoning fight which took place earlier this year he defeated fighter Rameau Thierry Sokoudjou.

EA Sports will also sponsor Sobral and Mousasi for the Strikeforce fight. EA Sports MMA will offer players some of the best fighters in the world along with their various fighting styles. The game is set to hit stores next year and can be played on consoles such as the PS3 and Xbox 360. The price of the title is however not known.