1We have already seen these iOS features on Android

At this year’s WWDC, Apple took the veil off iOS 10, its newest mobile operating system. Scheduled to be launched to the general public this fall, this software already has a developer version out right now.

During the unveiling of this platform, a large number of Android enthusiasts too were glued to their screens. And it would suffice to say that they were a bit shocked to see features in iOS 10 that they have already been using on Google’s mobile OS.

The rivalry between the two companies is at its peak right now, and each of them does not want to stay behind. This is the reason why we’re seeing so much parity between the features of these two platforms lately.

A number of iOS 10’s attributes are blatantly similar to those on Android. Apple would have wanted these to have gone unnoticed, but they haven’t managed to miss our eye. Here’s a list of 7 features iOS 10 borrowed from Android. 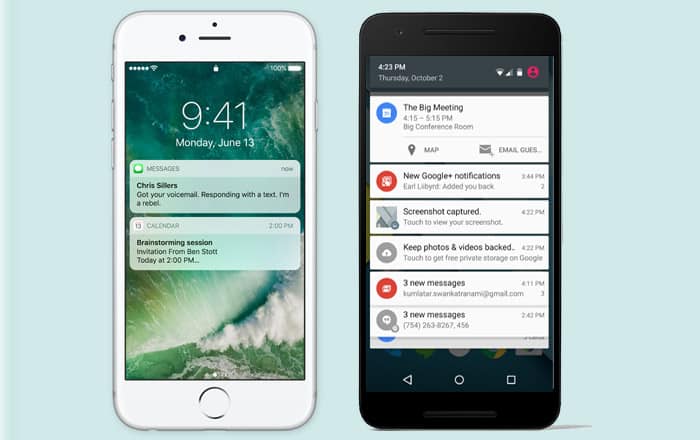 These have been on Android since the launch Lollipop back in 2014. Lockscreen notifications show you your alerts without requiring you to unlock your devices. Apart from saving time, this allows you to interact with them in a confined space without opening the entire app.

There is a card-based design on offer not only for these notifications but also for other things inside the iOS 10 interface. This change is again reminiscent of the design approach used by Google for its software products.

Plus, there is support for quick replies from the lockscreen now. However, this where the uniqueness of iOS 10 sets in. 3D Touch has been exploited by Apple even more with this release.

3D Touching on a notification expands it and lets you do more than just replying to your messages. You can open up your Calendar notification and mark your preference for the event. And thanks to support for third-party apps, the possibilities are endless. For instance, 3D Touching on a lockscreen notification from Uber lets you have a peek at the live status of your upcoming ride.