2– Clear out your RAM to speed up your iPhone:

Even iPhones slow down sometimes, no matter how good iOS is at managing background processes. This tends to happen especially when you’ve done something resource-intensive like playing a few games or clicking dozens of photos.

This is a neat little trick to try the next time your iPhone feels sluggish. Unlock your iPhone and hold down the Sleep button until the Slide to Power Off slider shows up. Then, press the Home button continuously for about 5 seconds till the home screen reappears. Your iPhone should feel good as new since this action clears up all your RAM.

The process is a bit more complicated for the iPhone X since it doesn’t have a Home button. To get over this hurdle, go to Settings > General > Accessibility > AssistiveTouch and toggle on AssistiveTouch. A white and gray circle will appear. Tapping on it will open up the AssistiveTouch menu, with a virtual home button at the bottom.

Proceed to Settings > General, scroll to the bottom, and tap Shut Down. The same Slide to Power Off screen appears, only here you’ll have to long-press the virtual home button. Apply pressure until your iPhone X turns black, flashes white, and then goes back to the Settings menu.

– Know what’s flying above you: 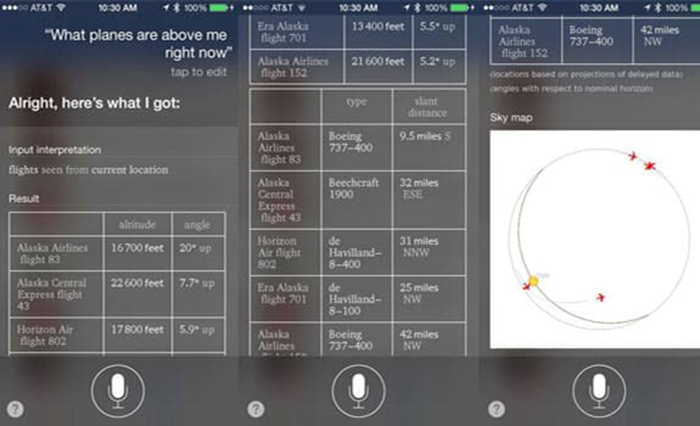 If you’re already impressed with Apple Siri, be ready to be even more so. A simple ‘what flights are overhead’ query will prompt Apple’s trusty personal assistant to pull information from the web and give you a detailed account of the airplanes that are in the sky around you, complete with the angle you’ll find them at.

Apart from that, Siri also lists the exact flight numbers and altitudes. And these are presented to you in the form of a neat table. Be aware that Apple Siri takes quite some time in order to gather this information. However, the wait is worth it, especially when you’re using this iPhone feature for the first time and are baffled by the reason for its existence since Apple likes to keep things tidy and free of redundancies, generally speaking.

Also, it’s incredibly pleasing to look up into the sky at the direction indicated by Siri and know the exact airplane flying above you. Not many people are aware of this secret iPhone feature. Plus, we suspect it may have escaped notice because not many folks really care to know what’s flying above their heads unless it’s a UFO.

– Raise the roof without spending a penny: The iPhone has a pretty solid track record when it comes to audio, but there are times when it’s just not loud enough. Before you rig up an expensive external speaker, try venturing into Settings > Music > EQ and choose Late Night. Trust us, it’ll make your songs blast out at much higher volumes than before.

If you’re wondering what Late Night does, it simply makes the quieter parts of a song louder and the louder parts quieter. This hack is by no means a permanent solution, but it’s an easy fix when you just want your iPhone to sing at the top of its lungs.