When you’re lost for words while texting a friend, these best emoticon apps for iPhone should help you find your tongue, with a smiley face attached to it. That’s right, we’re talking about those oh-so-useful applications which help bring the best of some much needed expression to everyday conversations.

If you finally deigned to use this form of communication only because the rest of the world does, do get familiar with what they mean. And if you’re wondering how to recover deleted text messages, emoticon messages, contact lists and other lost files from iPhone, you can hit up the Wondershare Dr. Fone app for iOS. Before we start with our list, we’d like to point out that emojis are hidden within the native iPhone keyboard too. In order to enable them in iOS, go to Settings and tap on General. 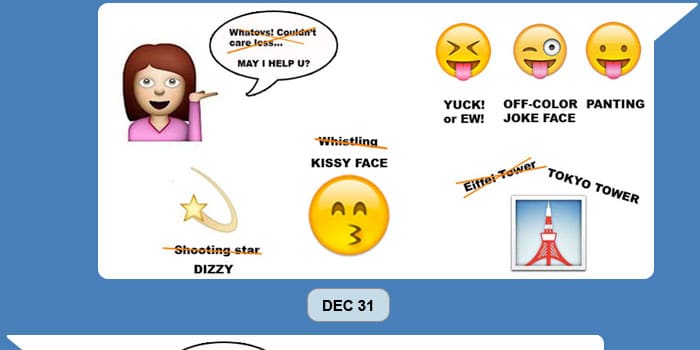 This will open up a list which includes Keyboard. Under the last mentioned is a Keyboards option. From there on, it will be Add New Keyboard and scroll to select Emoji. The emoticons can be used throughout iOS when you’re hitting the keyboard. They pop up when you prod the globe icon on the bottom left side. Not good enough? Here you go –

This tool on our round of best emoticon apps for iPhone features an array of 460 emojis. These icons can be used in mails, Facebook, Twitter and MMS/texts on the iPhone. Developer Yongchen Tang has thrown in some really fun 3D artwork apart from the staples such as cuddly animals, love-struck smileys and so on. Don’t know what we mean? Try a ninja and Elvis Presley for starters. 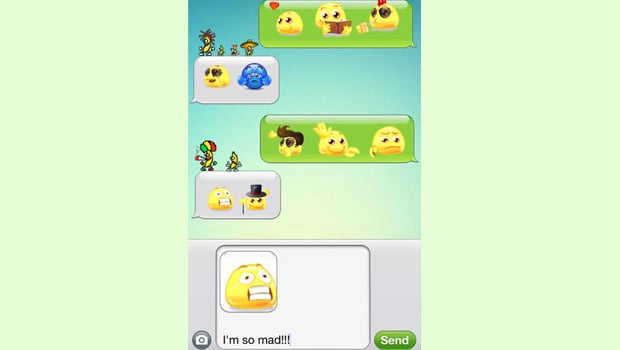 Two elements within this app that deserve to be highlighted cover the option to copy the emojis to clipboard and to do a quick search for specific emoticons. You can execute the last mentioned by typing in words such as I love you, Good morning, Smiling and so on.

Break away from that routine of sending one emoji at a time with this next candidate in our roster. As creator John Murray puts it ‘This is not a just text. It’s an art.’ But don’t take our word for it; just look at the cool text, special characters and emoticons smashed into single ‘art pieces’ to get an idea of what it’s like. 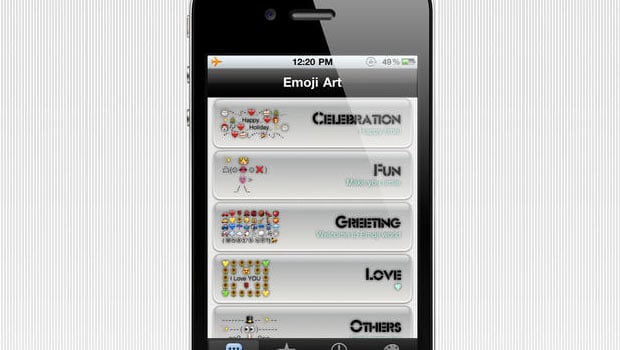 And it can’t hurt since it’s a free download, right? If a picture can speak an entire message, then you may find something useful in this assortment which is gathered under categories such as Greeting, Celebration, Fun and more.

So you were waiting for something that goes slightly off the beaten path? Avocado Hills brings you this neat little offering which can be used in most of your iOS applications. The whole set comprises of 1000 icons or symbols and counting. 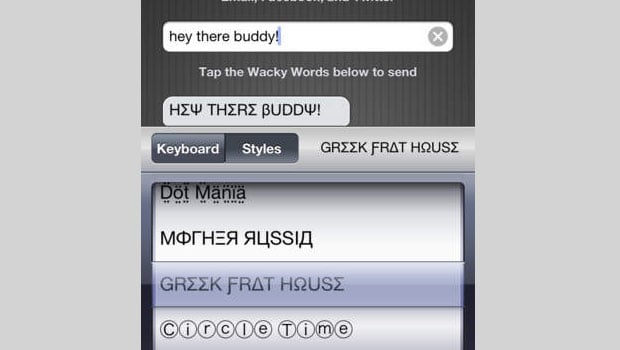 It may be a matter of opinion of course, but the emojis are not the most attractive part of the tool if compared to the fonts. You can type out text in various styles under the Wacky Words feature. You can have your alphabets upside down, appearing to be Greek letters, dotted along the top and bottom, circled, scratched out and so on and so forth.

This entrant in our lineup of apps may seem like it’s targeted towards those who want more options while using WhatsApp, Facebook or Kik Messenger. But developer Simon Huang also declares that you may drop the emojis almost anywhere you’re allowed to type in text. 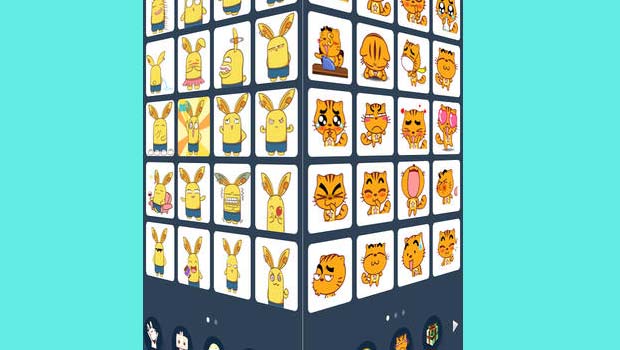 The application features close to 500 symbols and icons. Apart from the regular sort of emoticons you find in WhatsApp, there are some really nice animated ones which are more Facebook sticker-style. The lively rabbit and mole are our favorites from these.

Here’s yet another one which claims to be an artsy pick in this queue of apps for iPhone. You can use these animated icons while naming folders in iOS and in your contact lists too. There are over 3500 emojis art pictures to select from here. 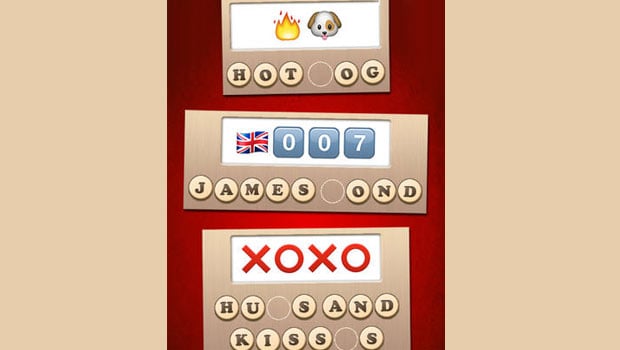 The creator has thrown in a little extra in the form of more than 25 fonts like the ones we saw in our third option mentioned above. What’s more, several dozen puzzle games involving the images are hidden within the application. The only bit of problem you may face with it is the lack of a search box for hunting through the scores of options.

If there’s some weird reason for you to be hanging on to iOS 5.0, then this tool may say ‘for iOS 7’ in the moniker; but it is actually compatible with any Apple device running iOS 5 or later versions of the OS. 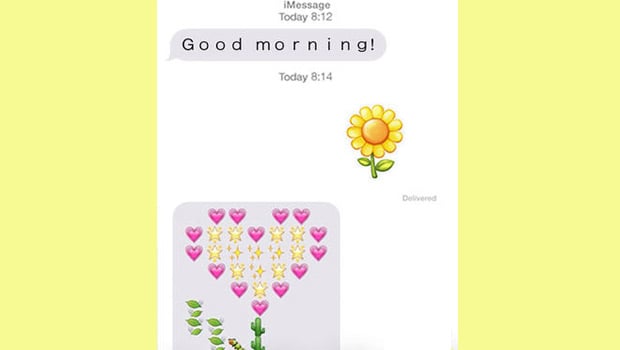 This free application has 15 categories of emoji art pieces, (meaning a picture made from several icons, in case you didn’t get it) each of which the developer calls presets. It even includes fancy fonts to let you hit out words in various styles. Lastly, Apalon Apps has even tossed in a Word Maker element which turns your text into emojis automatically.

Emojis are all the rage in Japan where carriers make a killing from selling them to customers. They’re becoming more popular than ever with people across the globe too. We’re sure you use them on a daily basis too. But do you know what these emoticons stand for? 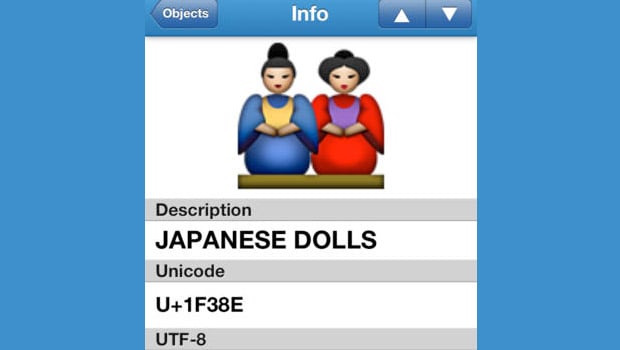 On the off chance that you don’t really get the meaning of each and every emoji in the set available at your fingertips, here’s a useful one by XCool Apps. For $0.99 you’ll be able to get a sort of general description of every icon available in the set.

Here’s a tip you probably didn’t really need – emojis aren’t for work mails or messages. Neither is XOXO. It’d be wise to save these best emoticon apps for iPhone when conversing with loved ones only. Does the standard iOS collection do it for you or did you think any of the aforementioned was more impressive owing to the variety it presents?

Microsoft Office for Mac 2011 will be out this October