Where shall we begin with iPad puzzle games that are the best ones in iTunes? The online store is stuffed with so many choices, you’re likely to have missed out on the lesser known ones which are just as good as the more popular games. Most of the offerings we’ve noted down may sound unfamiliar. But trust us when we say that they make for hours of casual gaming while you’re on the move or lazying around on the couch. Check them out – 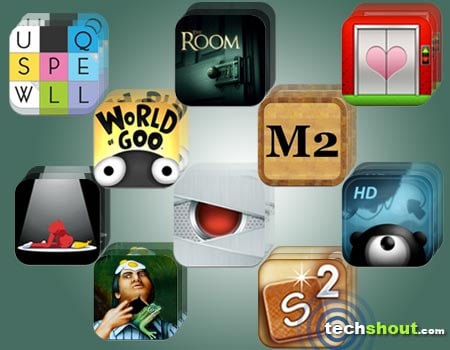 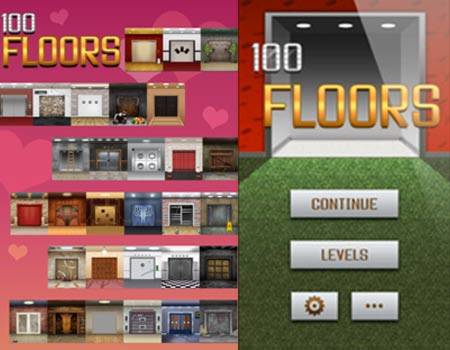 In 100 Floors you find yourself in front of an elevator in a strange building and the only way to go is up. Get the doors to open by using all your cunning, the inbuilt sensors in your device and the various tools which are made available across the levels. Forget about judging it by the first couple of levels. The higher you travel, the trickier and more fun it gets.

Take level 8 with the gorilla and banana, for instance. Don’t know what we’re talking about? You’d better see for yourself then. What’s more, developer Tobi Apps, keeps it fresh by introducing season updates. The last one was in celebration of Valentine’s Day. 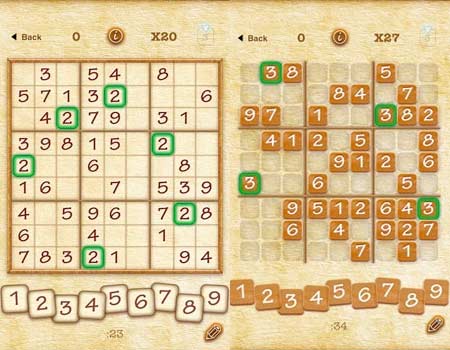 If playing with numbers is your thing, fall back on an all-time classic, Sudoku. There’s hardly any need to explain how it is played beyond the fact that you have a 9 x 9 grid, with each horizontal and vertical line having to accommodate all the numbers from 1 – 9. The Sudoku 2 HD app integrates a useful Hint system, online leaderboard support, a cool points structure and much more.

Even though there are different versions of this option in iTunes, the one we’ve picked out is by Finger Arts because of the crisp interface and how well the additional features are worked into it. If you’re not fussy, similar offerings by other developers shouldn’t fall short of your needs. 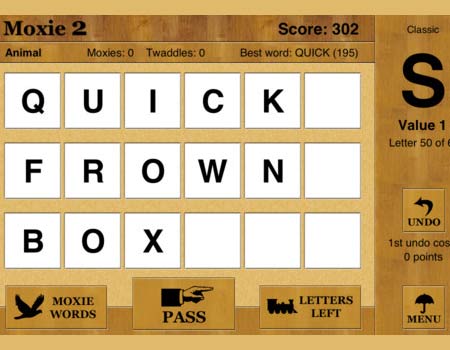 But if ‘wordplay’ is more of your scene, Moxie 2 should serve you well. The user interface is designed to look like a wooden board, something which lends a nice old-world feel to it. In this title, you start with a hand of 64 alphabets and a three-row grid, with each line supporting up to 6 letters. You can spell out 3 words for each of the rows or go for the preset ones delivered through the Daily Challenge.

The idea is to keep transforming the words into other words using letters which are presented one at a time. So say you had LIME and were given N, you could change it to LINE and then LINT if “T” was the next letter drawn out. Every ‘Undo’ after the first costs you points, a Moxie Word renders a bonus and not being able to use a letter leads to a score-reducing Twaddle. 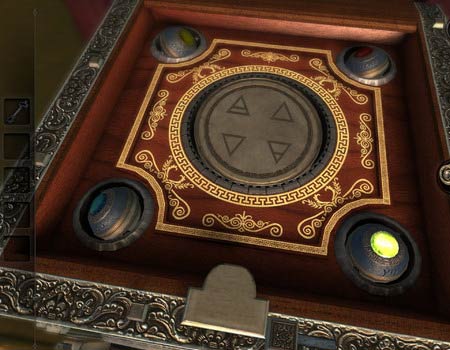 Don’t have the second-generation iOS tablet? Skip this one. Or buy a device and then pay $5 to download our fourth candidate which is fitted into this roster for a reason. It all begins when you walk into a room containing an outlandish box. There’s a strange note waiting for you on top of it.

Solve the conundrum and open the container to discover its contents and pick up objects for your inventory. Using all your wits to open intriguing boxes is what you’ll be doing during your time spent in The Room. The challenges are way more exciting than you assume they’ll be. Add to that the excellent graphics, 3D visuals and well orchestrated background score which set the perfect mood for mystery-solving; you have a winner. 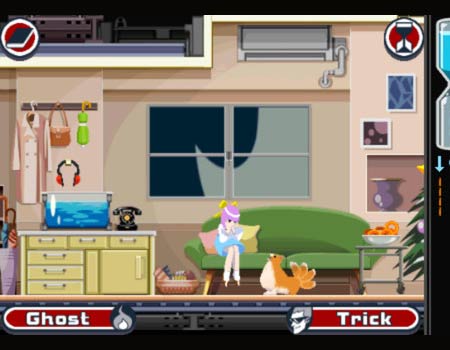 According to the rib-tickling icon advertising the title, you’re dressed in a red suit, lying face down in the ground with your rear side sticking up in the air and no reasonable excuse for the bad haircut. You’re a dead man who has to investigate who you are, who killed you and why.

The idea is pretty straightforward and your ghostly powers will help you in this quest. You can posses objects, move back in time by 4 minutes to stop someone else’s death and go back in time to re-solve various mind-boggling riddles. Watch out for dawn though – the first rays of light will snatch your soul away. It’d be good to note that this Capcom offering is not for you if you take issue with having to read a lot of dialogues while playing. 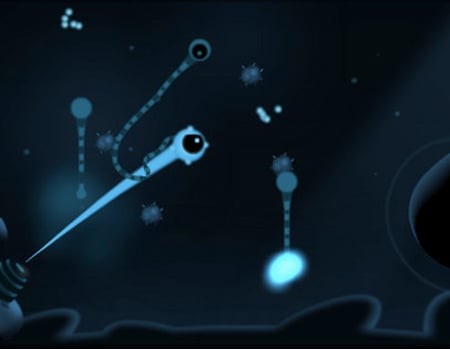 Haunted by a fascinating piano track is our next candidate up for consideration, Contre Jour HD, a Chillingo title set against elegant backdrops painted in shades of gray and white. It is your job to escort a little blob of an eye called Petit through perilous worlds interrupted by traps and hungry mouths, to an exit and from there, to the next level.

While moving the helpless Petit from one place to another, you’ll have vines, pulleys, air geysers and bouncy ground at your disposal. Don’t ignore the blue lights along the way; they’re bonus points. There are 5 chapters, 100 levels and 300 collectable lights on the table here. 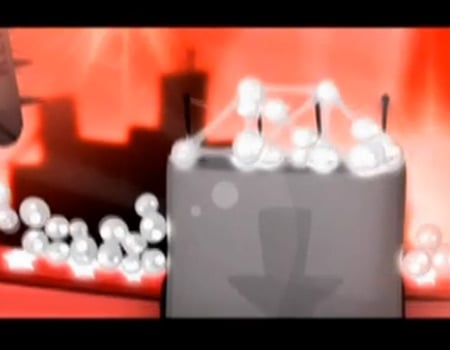 We think there’s a reason why you’re not addicted to World of Goo – you didn’t have it in your list, did you? You’ve been missing out on a lot of building fun which demands that you exert all your strategizing skills to help the Goo Balls move around in the magnificently eccentric world around them.

The title will have you crafting everything from flying machines to bridges to towers to cannon balls with different types of Goo Balls. The air is thick with wit, dangerous plots, the (omniscient) Sign Painter’s quirky lines and devious little brainteasers worth their weight in the time wasted over the Goo Balls. We’ve got two words for it – must have. 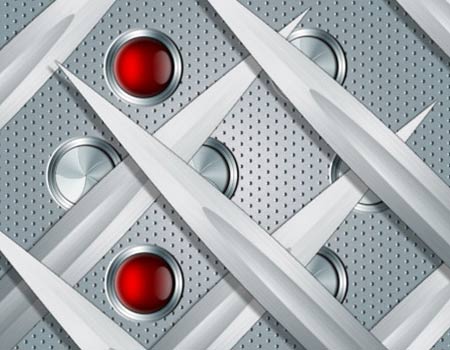 Dislike sharp objects? It’d be best to stay away from this contender then. For those who don’t feel squeamish at the sight of blood spatters, Slice HD is a cool title which will have you pushing buttons. But before you get to these, you must use as many fingers as you wish to move some dangerous instruments out of the way.

There all kinds of razors, blades and knives to shift around. Most of these objects can only be budged in specific directions and bounce back into position if you don’t keep holding them away. One wrong move and you’ll be greeted by a spurt of blood. And to add insult to injury, you’ll be forced through the walk of shame back to a reset. 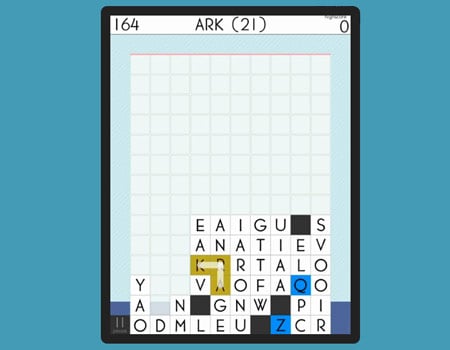 Sobering down to a couple of choices which will have you thinking about words, we’re happy to drop SpellTower into our lineup. You have to roll up your sleeves and be prepared for the rise of the alphabets. Swipe through a growing pile of letters to form words and keep the tiles from touching the ceiling.

You can swipe to either side of the display, diagonally, backwards (only once per game) and so on. Forming a word crossing 4 letters gives you bonus points, make a word adjacent to black squares to eliminate them or employ blue letters to clean up a row. You have 5 modes to pick from including Debate, Rush and Tower. 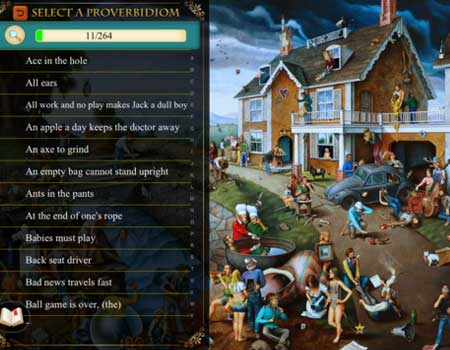 Spot the proverbs or idioms in the picture. Well, we’ve pretty much summed up the entire offering. A pleasant pursuit for recalling those sayings you grew up hearing, this one will get a few light-hearted chuckles out of you.

Proverbidioms takes you through numerous idiosyncratic pictures in which proverbs are hidden. In each frame, there are various human and animal characters as well as inanimate objects ‘acting out’ hints to different idioms. See how many you can find. You’ll also be treated to the origins, meaning and usage of these sayings.

Before we wrap up our recital of best iPad puzzle games, here are some honorable mentions – Where’s My Water, Words with Friends, Rise of Atlantis HD, Amazing Alex, Freeze, Bejeweled Blitz, Feed Me Oil, Cut the Rope HD and Angry Birds. These are some awesome titles which weren’t featured in our roster merely because you’re probably familiar with them already. The 10 top options we’ve lined up above are must-haves if you’re fond of brain-teasers. Feel free to point us towards any other interesting offerings we may have missed.