The best free screen recorders available out there have been listed by us below. You’re probably here because you want to prepare a presentation for the boardroom or class. Or you may want to create a ‘How to’ video on installing or playing around with software. Or what about that all-important duty video gaming enthusiasts must take on – Posting gameplay and high score clips online? Whatever be your requirement, we’re sure you’ll find the option to suit your needs optimally. 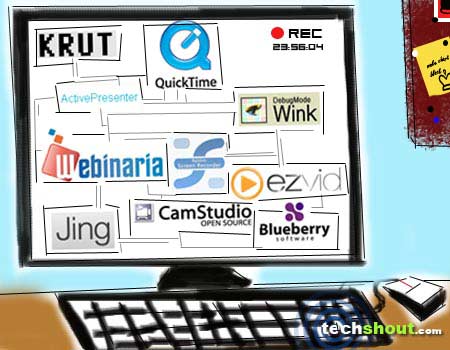 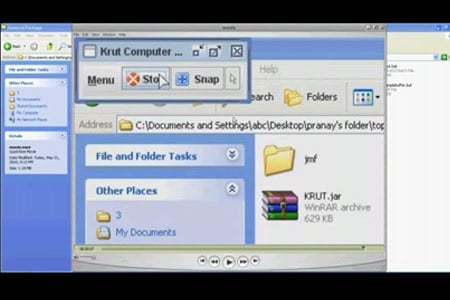 We’re going to start the show with a Krut which has been programmed using Java, meaning you won’t need to install the file after you download it. Everything you wish to capture on your desktop is outputted in three formats.

So you will be able to avail of an audio clip in WAV encoding, a MOV video file which does not contain audio and a MOV movie which has both the audio and video. One of the highlights is the Follow Mouse feature which keeps shifting the focus of the frame according to where you point your mouse. 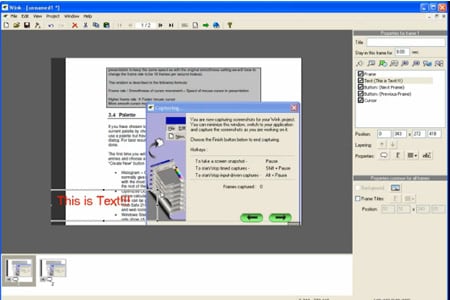 The second option in this free screen recorders collection is one which has been designed especially as presentation and tutorial creation software. Wink is available for Windows and Linux (x86), though we might add that we haven’t had the opportunity to try out the latter version. The tool allows you to grab images of what you’re up to on your PC and build a ‘How to’ with ease.

You can also choose to litter your project with titles, boxes, explanations, buttons and so on and so forth. The content is outputted in formats such as Standalone EXE, PDF, Macromedia Flash, PostScript and HTML. On the other hand, images are yielded in BMP, JPG, PNG, TIFF and GIF encoding. 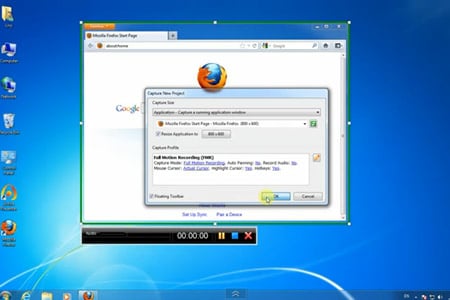 While our third addition to this free screen recorders queue can be downloaded without shelling out anything, it also comes in Standard and Professional paid versions. The ActivePresenter software delivers the ability to capture visuals as well as audio at the same time. It is fitted in with common features you would expect of it, such as editing content with cut, crop, change volume, delete, join and split operations.

You can export videos in AVI, WMV, FLV, WebM and MP4 formats and images in JPEG and PNG. SCORM is also part of the available options for packaging your final product. 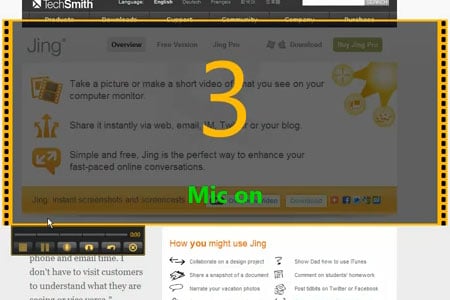 TechSmith has an application which permits you to capture and share images or videos of what’s happening on your display by selecting the window or region to which you want the frame to be restricted.

It can follow mouse movements, offers the choice to add narrations via a mic and you may IM, mail or share your project on social networks. Jing will let you do all that we’ve mentioned above, as long as five minutes of video is good enough for you. 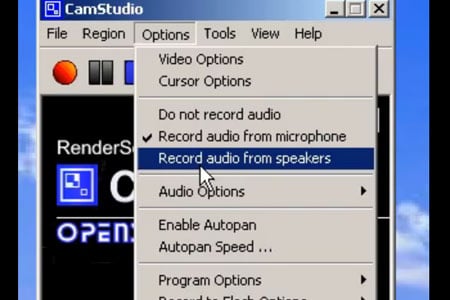 Think those YouTube or Vimeo ‘how to’ videos that have people explaining the lesson at hand in little picture-in-picture webcam boxes are better than plain old tutorials? The open source CamStudio utility allows you to do the same. Capable of getting audio along with video, it can be made to focus on just a particular area of your display, the whole thing or a program window.

The output is produced in the form of AVI files which can be transformed into bandwidth-conscious streaming Flash videos. You may also add anti-aliased captions to your content and highlight your cursor movements while capturing videos. But if you want more output formats to pick from, skip this one. 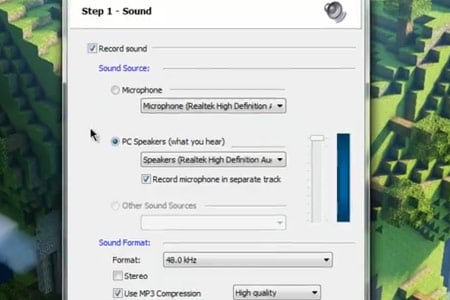 Another solution that’s similar to the one we’ve noted above is BB FlashBack Express. It can push out both AVI and Flash files, and you’ve obviously spotted the same difficulty with the limited output options here. But if that’s not a problem and something about CamStudio isn’t doing it for you, this one in our screen recorders gathering should be up for consideration.

If you want to catch an online video or webinar, you may even schedule the time of capture. Also, you can upload your creations to YouTube, Viddler, Revver and Blip.tv once you’re finished with it. 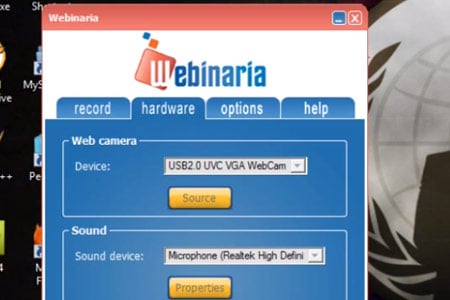 Next in line on our free screen recorders roster is Webinaria, an open source software which permits you to avail of AVI to FLV conversions of the content you craft. You can edit or save your videos with webcam, text or voice additions.

One of the key advantages it has over its peers is the ease with which new users will be able to navigate their way through various tasks. The selection of frame rates include 5, 10 and 15 per second. Additionally, you can even inspect the clip frame by frame and delete sections you don’t want. 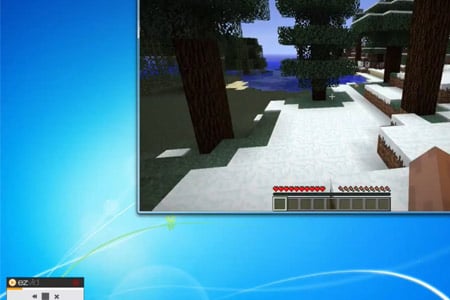 Advertising itself as a video maker for YouTube, Ezvid is stuffed with facecam, voice synthesis, speed control, voice capturing and many more functions. And staying true to its tagline, once users are done with editing a clip, it can be uploaded directly to YouTube. If you’re not interested in doing the same, you can simply save it for later use.

The UI is pretty easy on the eyes and it’s not at all difficult to navigate. You can stir in background music from a collection of tracks which are selectable from the interface itself, change the frame rate speed, drop in text and so on through this tool. Note – videos of your PC activities can be shot in 1280 x 720p resolution so that you have really good quality images to show for your effort. 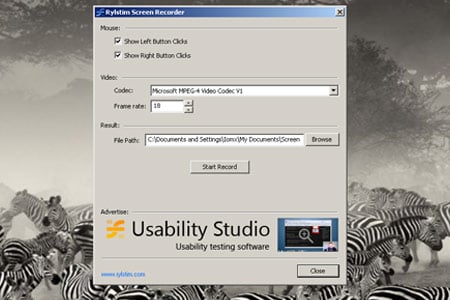 Need a light software to simply shoot what’s happening on your PC? Look no further down this roster, Rylstim is as basic as it comes. All is does is capture your desktop movements when you hit start, through the very plain interface. You can stop the process by either pressing F9 or clicking on the application’s notification icon.

Advertisements are presented to you (not really a source of annoyance) via the UI itself and you can set the desired frame rate at anything between 2 to 30 FPS. There are a number of output formats to choose from and the right as well as left mouse clicks can be part of the show, if you please. 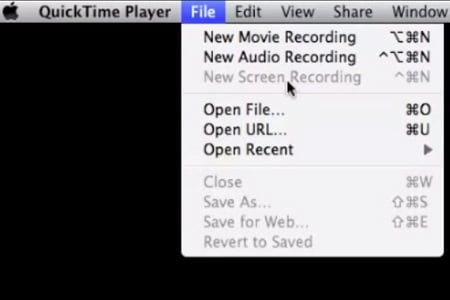 If you’re a Mac user, there’s no need to hunt for ways to make a tutorial or grab the action on your desktop through a video capture. The QuickTime Player hides a solution to carry out the task. Audio can be added through the embedded mic, an external microphone or the mic on an Apple display that has been hooked to your Mac.

You can make a clip out of the activities being executed on the entire desktop or just a small part of it. Once you hit ‘stop,’ the finished quality of your content can be tweaked, it may be saved to your Mac and you may also choose not to have the mouse clicks appearing within the concerned video.

Feel like you have your presentation problems sorted after going through our collection of the best free screen recorders? We’re happy to have been of help if you do. Think we’ve left out any contenders which should have been included in this queue of screen recorders? Or have you tried out any of these gems and had trouble with them? Do tell us about it; that’s what the comments section is for.

6 Best Safari Extensions To Power Up Your Browser