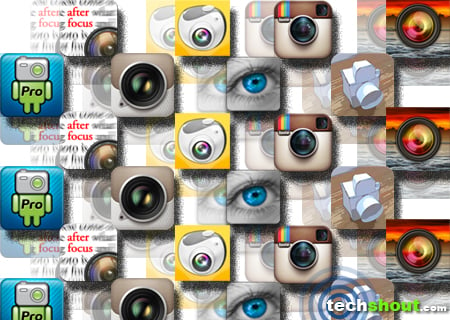 We’ve lined up some of the best Android photography apps that can spark fresh life into your captures. Almost every new smartphone running on Google’s mobile OS incorporates a highly capable camera starting from at least 5MP. Basically, phones and tablets with competent snappers have killed the digital camera. Well, almost. Here’s where the picture apps which we’re going to jot down come in handy. 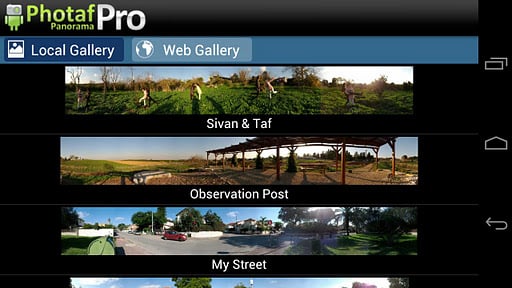 There comes a point in time where we all desire to go back to nature for a day or two and get away from our busy lives. While the sceneries offered by our big blue planet are breathtaking, it’s often hard to get the entire landscape within a single frame. Photaf Panorama Pro has a solution to that. Just as its name suggests, the application is capable of taking 360-degree panoramic images via joint efforts from the camera and the orientation sensor. Through this, you can snap up the entire surrounding in one single picture. Additionally, Facebook Share allows you to show off your picture skills with friends on the SNS or you could even upload them to Photaf.com. 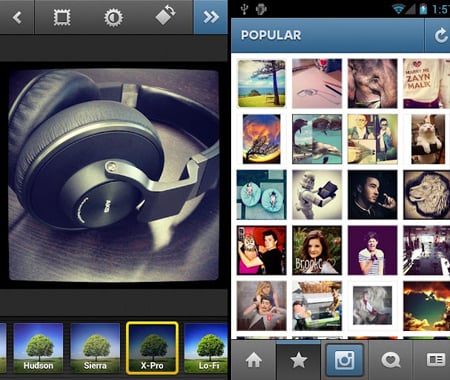 Popular iOS application Instagram, has made quite an impact on Google’s mobile platform since its launch. And that has earned it a spot in our Android photography apps roster. With several gorgeous filtered effects to choose from, you can personalize your images and give them a completely new look that sets them apart from the originals. Moreover, Linear and Radial Tilt-Shift blur effects allow you to incorporate an extra depth of field in captures. These tweaked images are shareable to Facebook, Twitter, Tumblr and foursquare, straight through the app. Instagram currently works on devices that run on OS version 2.2 or later and support OpenGL ES 2. 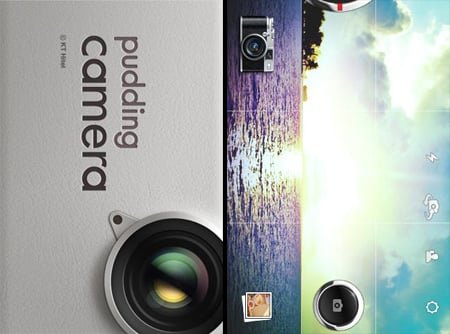 Not all high-end smartphones running on the Android OS out there pack in great cameras. Now that could be disappointing if you’re a picture buff of sorts. All your snapper needs is a little helping hand which the pudding camera application is willing to offer for free. What it basically does is, it mimics actual lens attributes such as motion 2×2, motion x4, fish-eye and triplex, along with filtered effects including panorama, vintage brown, vintage blue, vignette, dazzle, mono, noir and vivid, to derive DSLR-quality captures. Images snapped up through this app can be shared online to Twitter, Facebook, and Tumblr or through the developer’s pudding.to application. 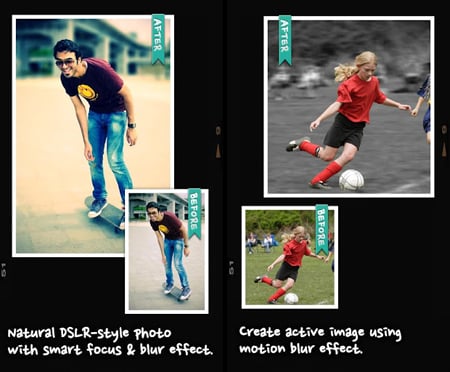 The next addition to our Android photography apps roster, AfterFocus, arrives with the aim of delivering DSLR-quality images through your smartphone. It basically incorporates 2 features for adding blur effects to images. With Smart focus area selection, all you have to do is draw a few lines to mark the background and the point of focus; the rest is left up to the app. The background blur effect option lets you incorporate various aperture styles into pictures. Additionally, it even packs in a host of effects ranging from basic to professional levels. To make things more convenient, the pro version of the application comes with the double picture feature which lets you snap up two images, where the second one is shifted slightly to the right to automatically determine the nearest object. This eliminates the need for manually drawing the focus area. 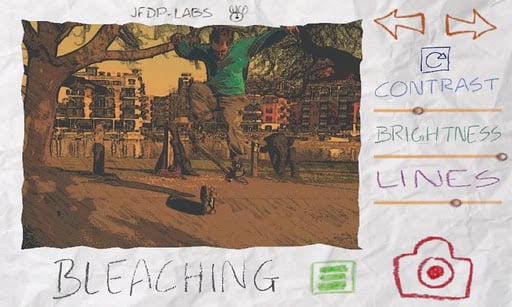 There are various tools available online and in today’s compilation, that can create cartoon-like or sketchy sorts of images. Unlike apps which add effects over an existing picture, we’ve come across one that can bring these effects to your camera feed in real time.

This not only allows you to view your entire surrounding in a completely different way, but also to understand how a picture could turn out without making any tweaks to it. The app in question wraps in a collection of customizations such as cartoon, sketch, comic book, half tone, noir, neon and many others. 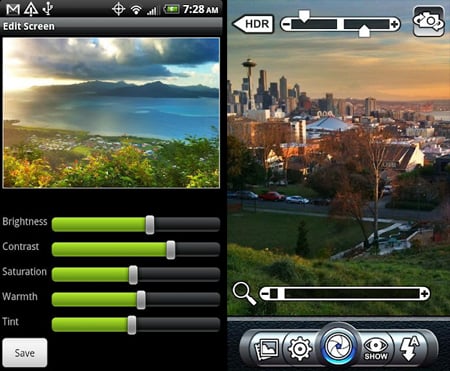 If you’re bored of dull and lifeless images that come through the camera employed on your device, then you’d probably like Pro HDR Camera. This app is capable of delivering pictures with a high dynamic range to your device. Here’s how it works – the application basically snaps up an image exposed for the highlights and another for the shadows. It then merges both pictures after automatically aligning them into a single frame. All you’ll need to do is tap the capture button and stay still. Adjustments can be conveniently carried out through the brightness, contrast, saturation, warmth and tint sliders included in the application. 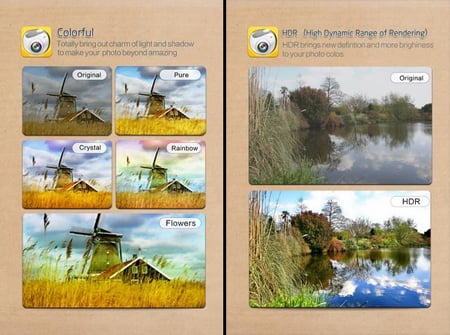 What puts Camera360 Ultimate in our list of Android photography apps is the simple and intuitive interface it has to offer along with a wide catalog of effects and features. On the effects front, you can choose from lomo, HDR, retro, sketch, colorful, dreamlike, 1839, funny, B&W, tilt shift and much more.

Additionally, it lets you carry out various adjustments to the brightness, exposure, contrast and white balance as well as select background scenes for a highly customized capture.

Once you’re done customizing your captures through various tools including the ones we’ve listed out, the Color Touch Effects application can add in an extra ‘touch’ of customization to images. The general idea behind the app is to allow you to recolor pictures and apply cool effects to them. Additionally, it lets you turn pictures into gray scale or sepia and add color to them again by simply touching the screen. Certain areas can be splashed with different shades. And once you’re done, they can be posted to Facebook or shared via email and MMS.

Now that we’ve jotted down the best Android photography apps, you can say goodbye to boring, dull and lifeless images. So what are you waiting for? Go ahead and satisfy your snap-happy self. And why not share some of your brilliant captures with us? If we’ve missed out on any interesting camera tool or you’ve got one you’d like to share with others, then simply drop a line or two in the comment box below.