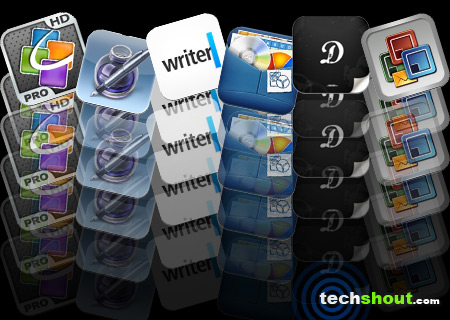 The following best word processor apps for iPad try to make up for what the Apple tablet lacks. Ability to view, create and edit documents on the iPad not only adds to your productivity but also gives you the freedom to work on the go, while ensuring comfortable operation. To make it capable of taking over the functionality of PCs, it needs to be loaded with some tools, which are available on a single touch through the iTunes. So read on to know more about these word processors. 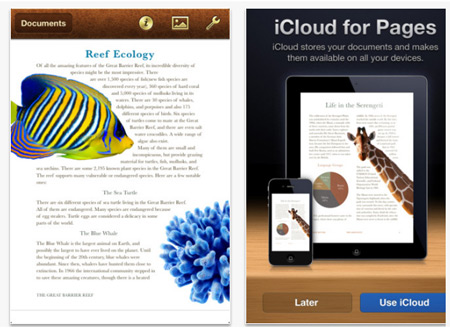 Described as one of the most beautiful word processors designed for mobile devices, this application is compatible with iCloud. So along with creating and editing documents on the iPad, you can also access them on other Apple devices including the iPhone and iPod. It also lets you open Word documents and plain text files along with allowing you to import files directly from the web, mails, Mac and PCs.

Besides the virtual keyboard, you can easily use the wireless Bluetooth keyboards and adding images, footnotes or endnotes to documents is not be a problem either. And once you are done creating the required document with some assistance from the built-in templates, export it as a Word or PDF file or simply print it out wirelessly using AirPrint. 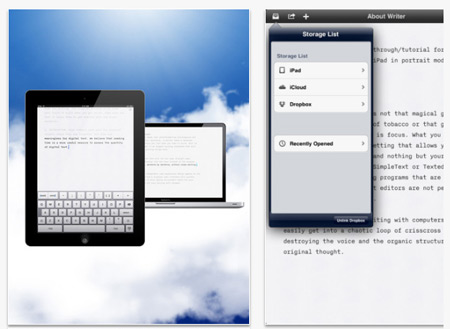 The intuitive and gesture supporting iA Writer is the next application on our list of word processor apps for iPad. The keyboard extension feature simplifies typing in text and supports navigation through arrow keys. Also, it lets you insert punctuation marks without having to switch keyboards. While you can concentrate on a single sentence using the FocusMode, undoing a certain mistake is as simple as swiping two fingers over the screen.

Boasting of a clean user interface, its writing typography has been especially optimized for the iPad. And with its iCloud and Dropbox integration, saving files should not be a problem at all. They can be shared via email as well as iTunes File Sharing without hassles. 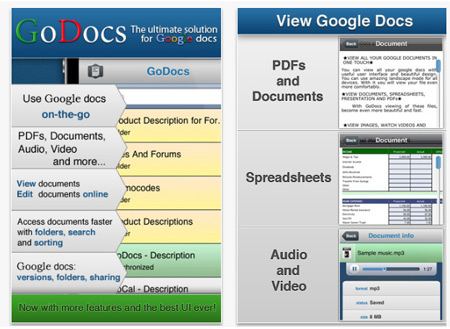 This application is basically meant to view and edit your documents saved on Google Docs onto your Apple iPad. In addition to letting you read and edit documents and spreadsheets, the GoDocs is also compliant with music and video files saved on the Google cloud. You can share files in formats like PDF or mail documents, images, audio or video files through it. Furthermore, you can also launch a search on the app to save up on time and access saved data from multiple Google accounts. And if your access to the internet is only for a limited time, simply download the files and save them on the slate for later use. The app supports both, the landscape as well as the portrait mode. 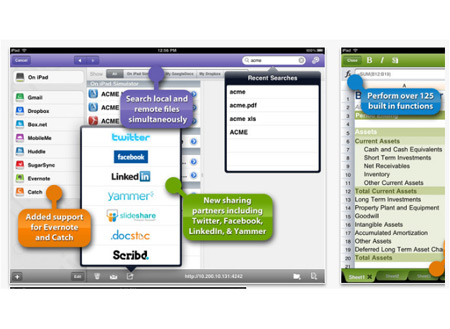 Next up on our lineup of word processor apps for iPad is the Quickoffice Pro HD, which is especially meant for enterprise users. Be it editing a word document, Excel spreadsheet or powerpoint presentation or saving files in the PDF format, this application for the iPad comes in quite handy. While most other applications of its ilk are limited to some or the other cloud services, it boasts of integration with services like Dropbox, Box, SugarSync, Evernote, Catch, MobileMe, Google Docs, Egnyte and some more.

And if that’s not all, you can easily share the content you created, with friends over social networking websites like Facebook, Twitter, Slideshare, Docstoc, Scribd amongst others. Moreover, the developers have worked towards optimizing it for the SmartTouch technology of the iPad to offer a smoother experience. 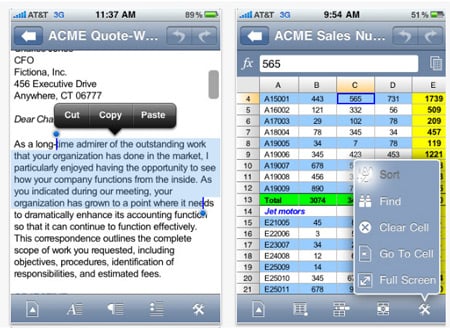 Documents To Go is another business oriented application allowing users to easily access and edit Microsoft documents on their Apple slates for last minute correction on the move. The recent updates to the app have improved the operation with the addition of features like full screen SlideShow, better slide navigation and bug fixes. Needless to say, like most other word processor applications, this also allows editing a wide range of formats including the common ones like Word, Excel, PDF, Powerpoint and more.

Yes, it also allows cloud synchronization through support for services like Google Docs, Dropbox, iDisk, SugarSync and Box. Furthermore, a free desktop app from the developers simplify exporting the edited files to Mac and PCs. 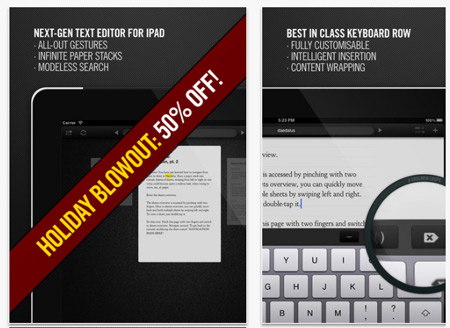 Pretty different from all the other applications chalked out on our list of word processor apps for iPad, the Daedalus Touch is sans the technical aspects and features stacks of papers instead of folders and files. It comes with attributes like character as well as word count and is said to be apt for large documents with over 20,000 words. The customizable app lets you choose the font and color which also includes a dark mode for typing at night.

Apart from support for TextExpander touch, it is integrated with a web browser for instant internet access. Need we mention that you can share files via mail and access the ones saved on cloud services like Dropbox and MobileMe?

So this is where we conclude our array of the best word processor apps for iPad. Feel free to comment if you think we have missed out on something that deserves a mention.

Kreeda Dance Mela MMOG brings out the Dancer in You: Review