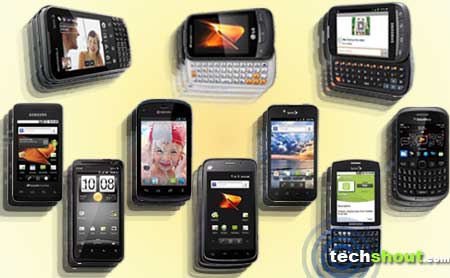 While there may be better devices than the best Boost Mobile phones mentioned here, these are your options if you do not want to get stuck with a two-year customer agreement or shell out a bomb. Sprint’s sister carrier lets you have the phone with prepaid plans and decide for how long you wish to use it, unlike other service providers that bind you with contracts. You are not likely to find very high-end smartphones here, but the ones listed below are decent enough to be considered. Read through to know more about them. 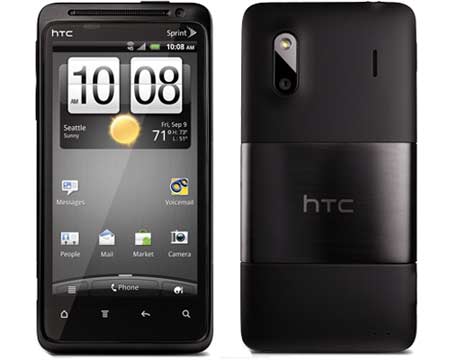 Leading the pack is the Evo Design 4G that builds on the success of the previously released HTC Evo smartphones. As the name suggests, it runs on 4G network speed and even allows you to switch between 3G and 4G modes.

It brings Android Ice Cream Sandwich to the platter and acquires multitasking properties from a 1.2GHz processor. In addition, it flaunts a 4-inch qHD screen and a 5MP camera as well as a 1.3MP front-facing webcam to facilitate video calling on the move. 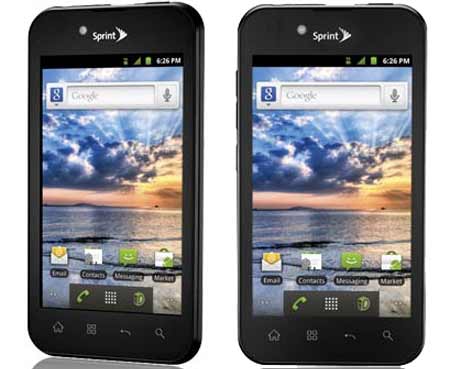 The second place on our lineup of boost Mobile phones goes to the LG Marquee, that runs the Gingerbread platform, but an ICS update may be on its way. The Wi-Fi-enabled handset’s front panel accommodates a high resolution Nova touchscreen that offers a multi-touch real estate of 4 inches, while a 5MP camera with video recording capability graces the flip side.

A 2MP webcam has also been thrown into the mix and an application processor that can clock in a speed of 1GHz rests under the hood. 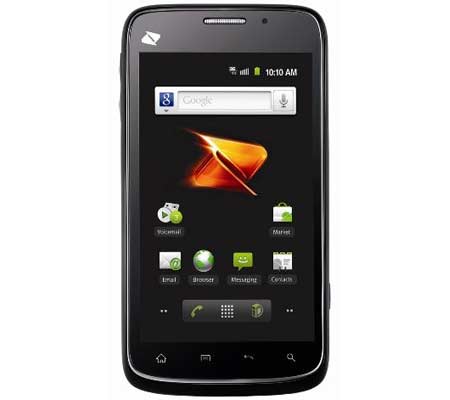 The ZTE Warp is another mid-range device that goes easy on your pocket without missing out on essential features. Its 4.3-inch touchscreen makes it the phone with the largest display in the Boost Mobile stables, and the Android Gingerbread platform makes it intuitive enough to ensure smooth navigation.

A 5MP primary camera with auto focus and LED flash has also been provided along with an expansion slot that supports a microSD card of up to 32GB capacity. Its internal operations are carried out under the supervision of a 1GHz chipset. 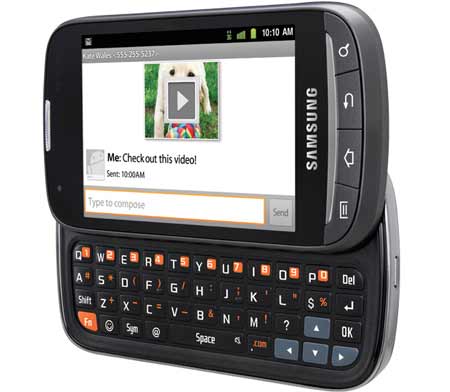 Texting-buffs looking for a prepaid device sans the restrictive contract might want to give the Samsung Transform Ultra a thought. The front panel is dominated by a touchscreen that should make for smooth navigation through the device while a physical QWERTY keypad slides out from behind the display to facilitate typing.

It offers a bite of Android Gingerbread and lets you record videos, click pictures and engage in video conferencing using a 3MP primary camera and a front-mounted VGA webcam. 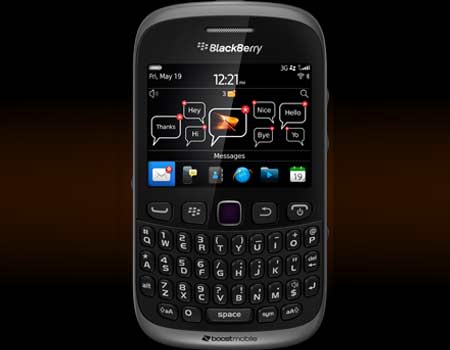 Although you have better choices if your preferred platform is Android, those who are not too keen on picking up a Google-certified device can consider this BlackBerry contender listed on our compilation of Boost Mobile phones.

The affordable handset tags along most of the social features associated with RIM’s OS and a full QWERTY keypad for convenient typing. The Wi-Fi-enabled Curve 9310 also comes with built-in GPS and a 3.2MP camera with video recording capabilities. 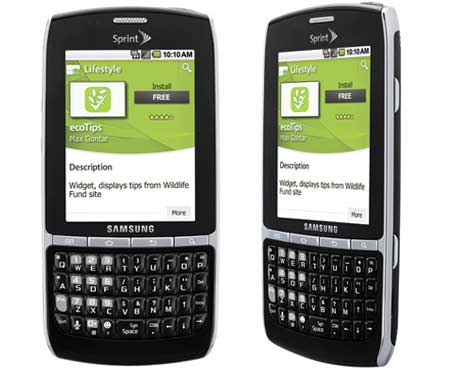 Coming back to Android devices, the Replenish from Samsung is another QWERTY phone for frequent texters who are not fans of virtual keypads. Blessed with features like the Gingerbread platform, Wi-Fi connectivity and built-in GPS amongst others, it features a multi-touch display too.

The phone’s 2MP camera should assist you when it comes time for decent pictures and healthy video. 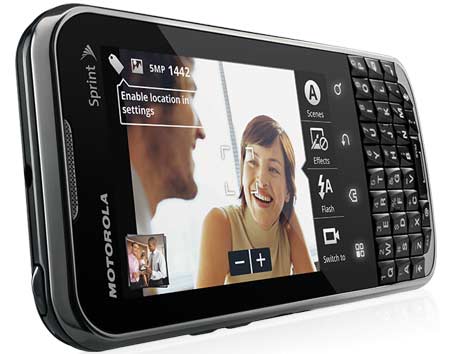 The above mentioned phones are definitely not your only choices in the QWERTY-touchscreen category. The Motorola XPRT lets you have the best of both worlds too. It provides a multi-touch real estate of 3.1 inches and employs a 5MP rear-facing camera with video recording capabilities.

Operating with the help of the Gingerbread OS, the communication features of the handset include Bluetooth and Wi-Fi amongst others. 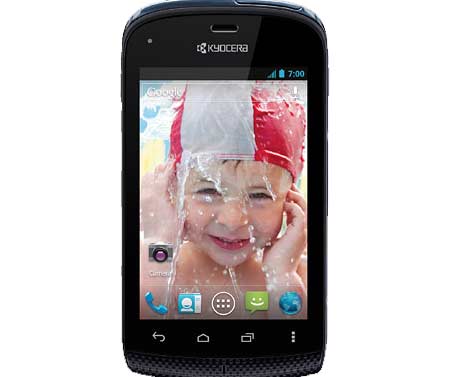 The next alternative on our queue of Boost Mobile phones is yet to make its debut through the carrier. It is slated to hit store shelves in August this year and will tag along the Ice Cream Sandwich platform, a 1GHz Qualcomm Snapdragon processor, a 3.5-inch multi-touch screen and a 3.2MP camera amongst others.

But, the key highlight of the device is its ability to withstand splashes, spills and even being immersed in fresh water, up to a depth of 3 meters. 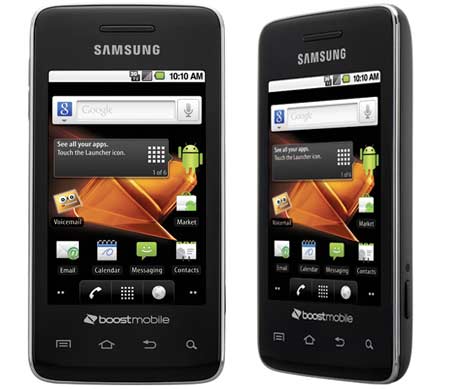 The device manufactured by the South Korean giant, Samsung, treats you to Gingerbread. Its front panel accommodates a 3.2-inch multi-touch display, while the flip side sports a 2MP primary snapper.

The lightweight device lets you enjoy wireless internet connectivity and can pair up with Bluetooth-enabled devices, courtesy its Stereo Bluetooth capability. Needless to say, the Android phone has been loaded with a number of Google Mobile services too. 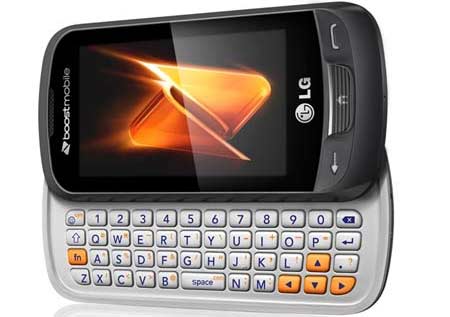 Besides smartphones, the carrier in question also stocks up on feature-rich devices, one of which is the LG Rumor Reflex. This environment-conscious device is armed with a full QWERTY keypad and a 3-inch touchscreen, in addition to a 2MP camera for capturing videos as well as pictures.

It is capable of connecting to the web wirelessly and coughs up the juice for close to 5.3 hours on a single charge.

After having a look at some of the best Boost Mobile phones, you may have second thoughts about binding yourself to a two-year contract. So if the prospect of owning a mid-range phone to free yourself from the clutches of an unwanted commitment appeals to you, choose any one of the above mentioned devices and bid goodbye to those restraining agreements. Do share your views with us.