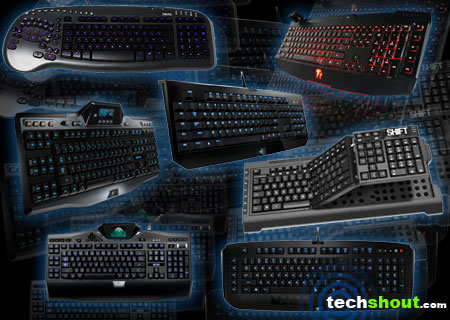 The best gaming keyboards list is here to highlight the cream of the crop. The computer accessory may just be a typing apparatus for most individuals but to gamers, it is more than just that. They perceive them to be weapons of virtual mass destruction. And just in case you’re wondering, the armory is packed with loads of formidable firepower options which emerge from the bunkers of companies like Razer, SteelSeries and Logitech. Here to accompany the best gaming mice in the industry is our list of add-ons. 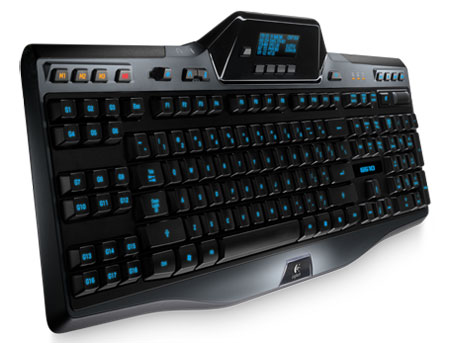 Unlike others of its ilk, the Logitech gaming keyboard G510 offers vital information about the game at hand. It accommodates a Game Panel LCD screen right in the center of its chassis, which provides real-time game stats, VoIP communication data, system information and other such notifications.

There are also 18 programmable G-keys right at your fingertips and with 3 macros assigned to each button, you can configure up to 54 individual functions for every title you play. Multi-key input for up to five buttons, 500Hz report rate, instant media access, game/desktop mode and integrated USB audio are also on the cards when you purchase this device. 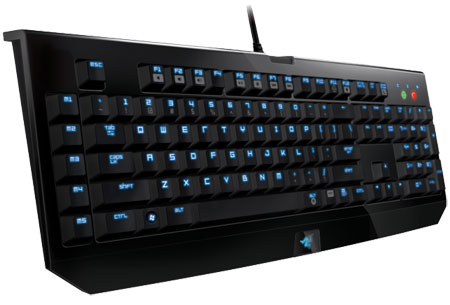 The Razer BlackWidow Ultimate which is infused with mechanical key technology for tactile feedback, also comes along with optimized actuation force of 50g. 5 additional macro keys, 10 customizable software profiles with on-the-fly swapping and 5 levels of lighting for individual backlit keys are some of the other specs chalked out in its menu.

The key matrix and on-the-fly macro recording ability make this an ideal addition to our gaming keyboards list. And unlike its namesake, the BlackWidow Ultimate has many mates to boast of, some of which include a Mass Effect 3 rendition and a Dragon Age II Collector’s Edition as well as a nifty Stealth Edition. 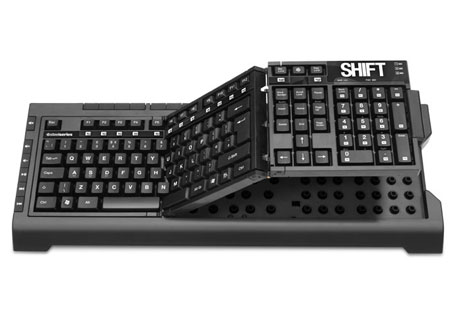 As the name suggests, the SteelSeries Shift’s main highlights are the interchangeable keysets. According to the company, whether it’s an RTS, FPS or MMO, this peripheral is an apt ammunition option to any gamer’s holster. Players will be given the liberty to personalize each key and take complete advantage of on-the-fly recording as well as anti-ghosting of up to 7 simultaneous keystrokes. When playtime is over and work summons you, the keyboard base and standard keyset provided in the package, will aid you in getting back to your daily routine. The keypad further supports 8 programmable hotkeys as well as fully labeled shortcuts and macro keys. There is also a SteelSeries Shift Medal of Honor Edition for fans of the game. And for World of Warcraft loyalists, a WoW Cataclysm edition of the same is up for grabs. 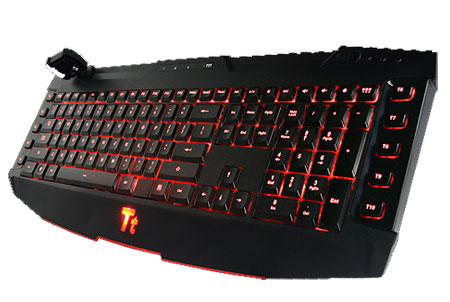 Up next in our gaming keyboards list is the Thermaltake eSports Challenger Pro. Aimed at setting your gaming space ablaze, it quite appropriately features dragon-red key backlighting as well as a gold-plated USB connection cable. Adding to the hardware specs are 10 customizable macro keys, 6 multimedia buttons and a 6,000RPM Tt. breeze hand cooling fan for those intense action sequences. Boasting of a 10 million keystroke lifespan, the Challenger Pro also includes 64KB onboard memory for storing up to 40 macro keys. For a smooth gameplay experience, there are additional W,A,S,D and 4 directional arrow removable keycaps. 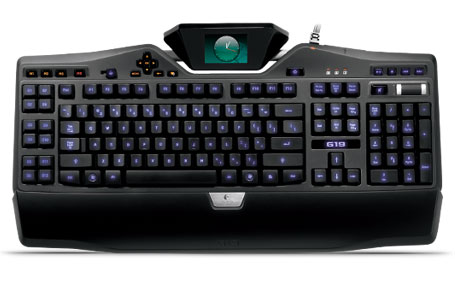 Much like its G510 counterpart, the Logitech G19 also sports a Game Panel LCD screen. But this time around, the company has endowed it with resolutions of 320 x 240 pixels. This color display shows off VoIP communication data, video playback and even image slideshows.

Claiming to put an arsenal of advanced gaming technology by your side, this peripheral comprises of 12 programmable G-keys, custom color backlighting for gaming even in the dark, a pair of USB 2.0 ports and multi-key input. Furthermore, it also includes a game/desktop mode, instant media access and sufficient onboard memory for saving your profiles. 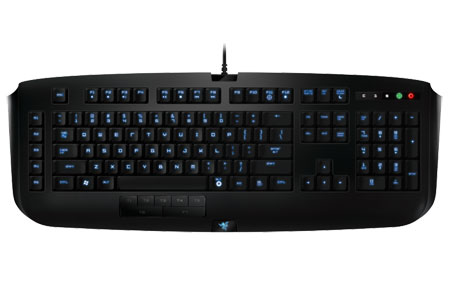 No, the Razer Anansi doesn’t have anything to do with the tale of the spider trickster from West African lore. It however, is another deadly inclusion to our gaming keyboards segment. Touted to be perfect for MMO gamers, the intuitive gadget enables you to utilize up to 7x more commands and abilities. This can be done thanks to the insertion of 7 thumb modifier keys which are conveniently placed below the space bar.

The addition of these buttons certainly gives you an edge, especially during intense boss fights, allowing you to throw all you’ve got at the enemy with just single keystrokes. Great for indulging in PVE and PVP action, it further lays out 5 additional gaming macro keys and more than 100 programmable keys with on-the-fly macro recording. 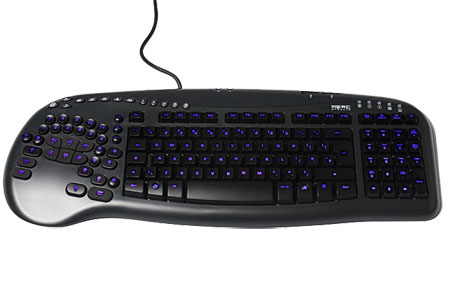 Endowed with an appearance that has the license to kill, the SteelSeries Merc Stealth accommodates 34 dedicated keys for tweaking your settings and macros. You are also provided with easy access to various general keys such as navigation and multimedia along with rubberized ones for keeping you in control of the situation even though your palms are all sweaty. Fitted with the SteelSeries Z-Engine software, each button on the board can be programmed to suit your desire. More customization options come in the form of 3 color illumination choices, namely red, blue and purple. These hues can be exploited and set to 4 different levels that read as subtle, ambient, intense and off. Lastly, its anti-ghosting capability permits 7 simultaneous keystrokes.

So the next time you step into the virtual battlefield, arm yourself with one of the aforementioned gadgets from our best gaming keyboards roster that is sure to give you the upper hand during gameplay. LAN parties will never be the same if you enter the room porting one of these peripherals in your arms. Do let us know which keyboards caught your fancy in the comment box. All we can say for now is ‘Rivals, watch out.’

Tips To Boost Your Office’s Cybersecurity