We’ve got 10 of the best business phones lined up for you today, each proffering features that can not only help you maximize productivity, but also keep you entertained. These handsets come from some of the most popular brands in the tech scene, running on popular platforms covering Windows Phone 7, iOS, BlackBerry and Android. To top it off, they even sport several handy attributes that make them all the more desirable for enterprise use.

To be listed as an ideal phone for work, a device must fill a certain criteria. And the Samsung Galaxy Note can meet the required standards. To make it enterprise-ready, the South Korean conglomerate has incorporated a host of features including the S Pen for added flexibility of input through the 5.3-inch WXGA HD Super AMOLED touchscreen.

With the Premium Suite update that’s already available for most countries, you’ll gain access to a wider list of capabilities such as S Note, Shape Match and Formula Match, My Story as well as an updated S Memo app. Well, these combine to form just the icing on the cake. The main components include a 1.4GHz dual core processor, 16GB of internal memory and 4G LTE connectivity. 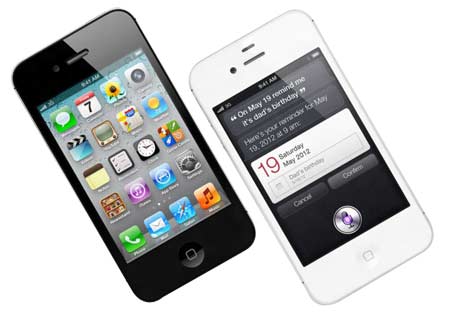 The next device that pops into our head when we think about business handset is the iPhone 4S. Being the most recent smartphone from Cupertino, productivity appears to be at no compromise here, with a dual core A5 SOC doing all the heavy lifting, while a retina display sits on the front for clear visuals. This Apple creation wouldn’t be much of a pick without the iOS platform. The OS in question brings in numerous attributes including FaceTime which enables video calling in real time between Apple devices and iMessage, an IM tool that aims to keep you connected at all times. And let’s not forget virtual assistant Siri, that helps you get things done by employing simple verbal requests. 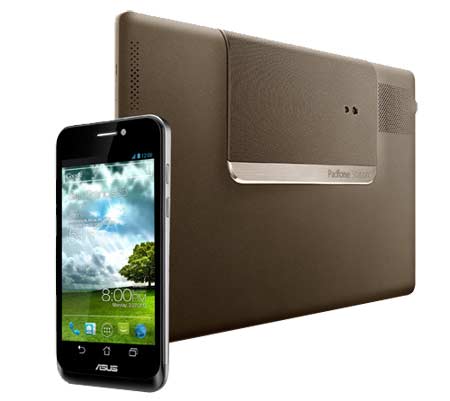 What makes the Asus PadFone a noteworthy addition to our list of list of enterprise-ready phones is its 3-in-one transformable design. This device can not only be used as an independent handset, but also as a tablet and notebook through the accompanying display and keyboard docks. So here’s how it works – simply slide the phone into its housing on the PadFone Station and you’ll have a full-fledged 10.1-inch slate.

To make things more interesting, you can even pick up the PadFone Stylus Headset accessory. On the specifications front, Asus has embedded a 1.5GHz Qualcomm Snapdragon S4 8260A dual core processor beneath the handset’s 4.3-inch qHD Super AMOLED display, along with 1GB of LPDDR2 RAM and options of 16GB, 32GB and 64GB eMMc flash. 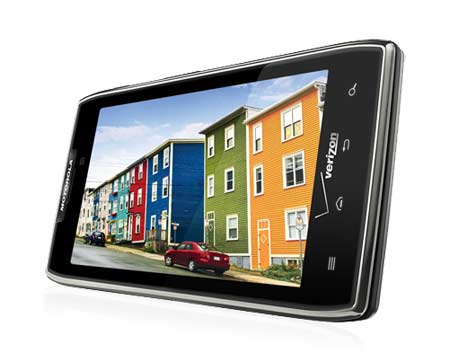 A lot of smartphones tend to feast on battery power. And if you travel a lot, it’s surely going to be a hassle recharging the device every now and then. That’s mainly why we’ve picked the Motorola Droid Razr Maxx for today’s roster of phones built for work, specifically for the extended activity life it proffers. Through the 3300mAh Li–ion battery, you’re most likely to receive around 21.5 hours of talktime or 15.8 days of standby.

Apart from this, there’s a lot more to drool over. Motorola has packed the Droid with a 4.3-inch Super AMOLED Advanced display, 4G LTE connectivity, a dual core 1.2GHz processor and 1GB of LPDDR2 RAM, all within a slim 8.99mm profile. And what makes this handset an ideal travel companion is the Kevlar-enforced back panel and the Corning Gorilla Glass coating on the front. 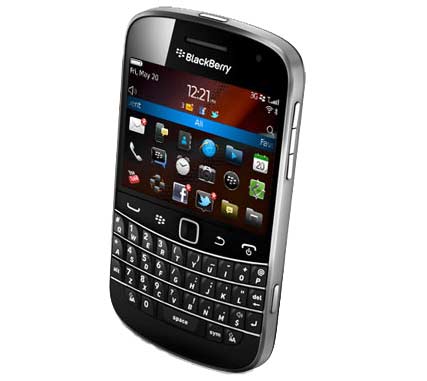 RIM is known for creating some great handsets. And the BlackBerry Bold 9900 is yet another addition to its iteration of enterprise-class handsets. Packing a touch and QWERTY combination in the traditional BlackBerry design, this smartphone aims at delivering the best of both worlds.

Here, you’ll be able to conveniently navigate through menus and websites via the touchscreen as well as quickly input text with the keypad. Hidden within this handset is a Qualcomm 8655 1.2GHz SOC, 768MB of RAM and 8GB of eMMC flash storage. On the front, you’ll find a 2.8-inch Transmissive TFT LCD with a VGA resolution of 640 x 480 pixels, while the rear flaunts a 5MP camera proffering 4x digital zoom and 720p HD video capture amongst others. 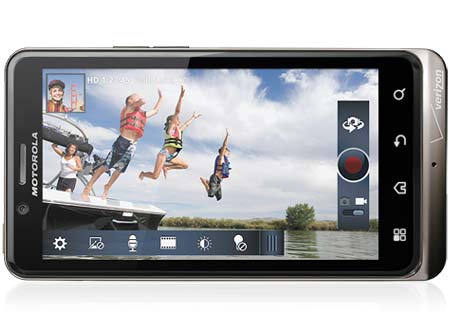 The Motorola Droid Bionic might appear to be more of an entertainer than a smartphone for work. Well, we feel that the Libertyville-based manufacturer has done a pretty good job at maintaining a balance between work and play. Built around dimensions of 66.9mm x 127.5mm x 10.99mm, you’ll find a 4.3-inch TFT qHD 960 x 540 display, 16GB of on-board storage, a 1GHz dual core processor and an 8MP AF camera fitted within the device.

With a WebTop-enabled accessory, you can conveniently transform your handset into a portable computer with a full Firefox browser in tow. Additionally, there are a bunch of useful security features. They include PIN lock, password protection, data encryption for the internal memory and SD card as well as the ability to remotely wipe data. 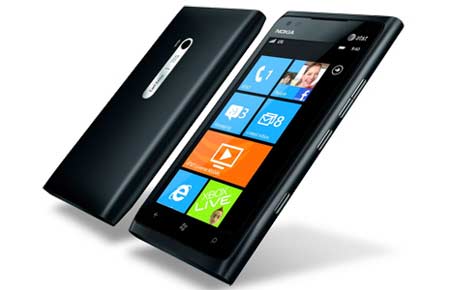 For those who need to stay constantly connected, we couldn’t think of anything other than the Windows Phone platform. The Nokia Lumia 900 being a top-end device running this OS, comes with a wide catalog of features that are sure to be beneficial for enhancing productivity whilst on the go.

A Qualcomm APQ8055 processor clocked at 1.4GHz takes on the task of delivering a smooth experience with 512MB of RAM. Additionally, you get 16GB of built-in storage and a 4.3-inch AMOLED ClearBlack glass touchscreen fitted within the one-piece polycarbonate form factor. To top it off, there’s a host of Lumia-exclusive applications available through the Nokia Collection section in the Marketplace. 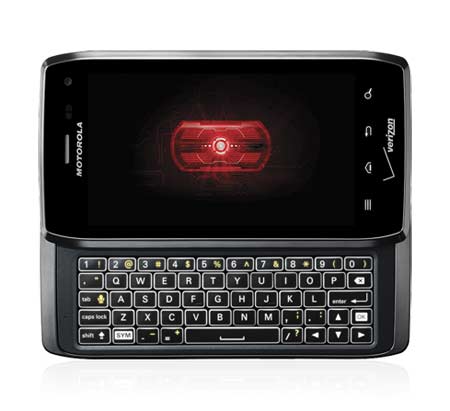 Next up in our roundup is the Motorola Droid 4. Unlike the QWERTY-touch combination found on the BlackBerry Bold series, this smartphone packs in the same design aspect, but a more streamlined approach. Featuring a slide out form factor, you can conveniently access the LED edge-lit QWERTY keypad, while still having a wide 4-inch 540 x 960 TFT LCD display for a full touch experience. Weighing just about 179 grams, the handset packs in an 8MP rear-facing snapper, Wi-Fi 802.11 b/g/n connectivity and the Android 2.3.5 OS amongst various other attributes. 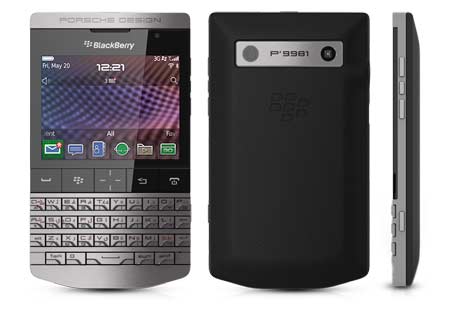 If you’re looking for a more stylish alternative to the touch-enabled Bold series, then the BlackBerry Porsche Design P’9981 is just the right pick for you. A blend of luxury and style is what RIM has managed to portray through this handset. Powered by the BlackBerry 7.1 OS, the device is crafted out of stainless steel with a smooth leather finish. On the inside, the manufacturer has implemented similar specs to that of the 9900 including the 5MP rear camera, a 1.2GHz processor, a 2.8-inch Transmissive TFT LCD and 768MB of RAM. This stylish beast is also dressed with the Porsche UI which packs in new icons and a trendy appearance to match the exterior. 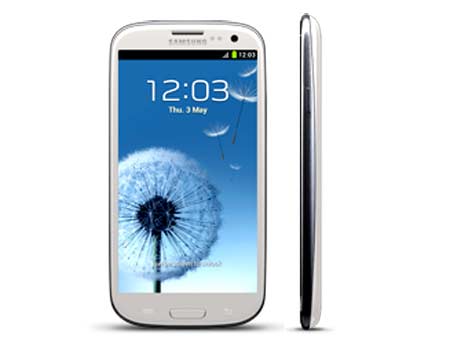 The last entrant in our enterprise-ready smartphone compilation is the Samsung Galaxy S3. Backed by dual and quad core processors for the US and global versions, respectively, this new Galaxy member has a lot in store for you besides high end specs. With Smart Stay, the device is touted to remain awake as long as you are, while Direct Call allows you to buzz any number by simply lifting the phone to your ear from Messages.

In addition to the S Voice attribute that responds to verbal commands, Samsung has thrown in a couple of security features to keep you connected to your work at all times. On the hardware front, you’ll receive a 4.8-inch HD Super AMOLED display, options of 16GB or 32GB of memory, a 2,100mAh battery and an 8MP BSI AF camera with zero shutter lag.

Now that you’ve seen some of the best business phones detailed clearly, you’ll know which of these aforementioned devices is right for you. And like we said before, they just aren’t about work and no play – all 4 platforms have a wide catalog of applications and games to offer. So choose well and do let us know about the gadget you plan on picking up.

Rock to the beat with Logitech’s Ultimate Ears 18 Pro Custom...

Google TV gets updated with Android Market and more