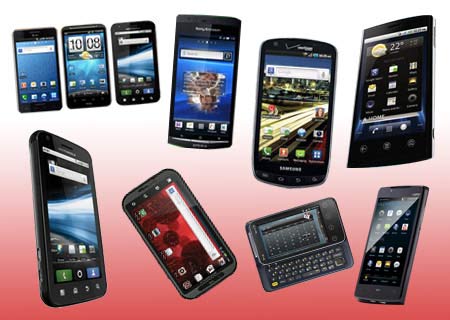 It’s just the start of the year and we are already penning down some notable products from vibrantly-lit tech lanes. This time around, we’ve restricted ourselves to some of the many innovations which were unfurled at the first tech fest of the year. Well, the CES 2011 flagged off its campaign with a bang, allowing several companies to showcase their creations. Amongst the various segments, the smartphone section was busy flaunting its guns loaded with superior features coiled into aesthetically designed architectures. Here is a gist of the flavors sprinkled out at the event as we serve up a list of the CES 2011’s 10 top smartphones.

If Apple and Samsung bagged the limelight in 2010, Motorola seems to have geared up for the ultimate battle this year. Amongst the varied handsets displayed at CES 2011, Motorola’s Atrix 4G stood out from the league of regular models. What is it about a smartphone that makes it distinct from the multitude of other offerings? Well, it is a unique sense of style, witty features and a distinct presence assimilated with superior technology. The Atrix 4G manifested it all in a chic, out-of-the-box form factor while its Android-enabled processing puts the solution right where it should be, under the spotlight. Powered by a 2GHz dual core processor and 1GB RAM, it has been touted to deliver optimum performance and display bright images on the qHD screen. Its 11.6-inch laptop dock blurs the distance between smartphones and tablets while the web operating system confounds the difference further.

The Atrix was not the only innovation from the company’s blanket that cast a mystifying spell. Droid Bionic from Motorola’s lab captivated several with its charm unfurled on the 4.3-inch qHD display. This handset has been embedded with an 8MP camera on the back profile while its frontal posture swanks of a VGA version. Attuned to work with both Wi-Fi and 4G LTE networks, the device encloses the web world with a ten time faster speed as opposed to 3G and supports HDMI connectivity. To serve enterprise purposes, it comes equipped with utilities such as Quickoffice while extending one-click access to conference calling, several Google apps and services as well as full calendar management.

HTC has been making short yet striking impressions throughout these years. At the CES 2011, it made yet another remarkable appearance with the EVO Shift 4G. An inheritor of a legacy, the device has almost everything going for it. The product runs on an 800MHz processor for churning out a lucid and quick performance. Its 3.6-inch capacitive display and QWERTY keyboard assimilate with the 5MP camera to satiate conventional smartphone norms. Heralded to be a powerhouse for connecting with friends through social networking sites and messaging, this handset is slated to stride in through Sprint for delivering both 4G and 3G mobile broadband networks. The pre-order season for this model is now in full swing and will release later this month. However, the only setback could be that it is powered by Android 2.2 and not Gingerbread.

If the EVO Shift is not your cup of tea, then the HTC Inspire 4G could just quench the compelling thirst. This one also runs on the Android 2.2 OS and executes an impressive feat with the help of its Qualcomm Snapdragon 1GHz processor. Dressed in a graceful aluminum enclosure, the innovation has been outfitted with an 8MP camera for capturing 720p HD video and clean images. This gadget will pave its way through the AT&T channel while enabling users to browse the Internet and download content at a rapid pace, thanks to the 4G broadband connectivity.

Samsung Infuse 4G swayed into the gala with Froyo appeal and a 1.2GHz application processor. Plugged as the thinnest Android gizmo, it is outfitted with a 4.5-inch AMOLED Plus screen. Supposedly, this display flashes additional 50 percent sub-pixels of an image to extend refined contrast and outdoor readability. Besides, its 4G network will be fueled by AT&T which has also revealed to land the aforementioned Atrix along with the HTC Inspire 4G. Further, the Samsung 4G LTE smartphone too showed up with its bag full of Google Mobile services. Operating on the Android 2.2, it comes with a 4.3-inch Super AMOLED Plus touchscreen and rolls out Samsung’s Media Hub. The device also shimmers with a virtual QWERTY keypad and two cameras, each affixed on the front and back panels.

Though LG forayed pretty late into this competitive zone, it has managed to place its cards well in time on the table. We saw the unveiling of two handsets, namely the LG Optimus Black and Revolution. The former has been equated to the rumored LG B which was anticipated to come ashore at the CES. The Black is adorned by a 4-inch display and a 2MP front-facing camera. It lays claim to unfolding optimum visual and telephonic connectivity. Measuring 9.2mm, it is said to be ‘the innovatively slim smartphone with the best display clarity’. Whereas its companion dubbed the Revolution rides along this creation on Verizon’s 4G LTE networks to proffer users blazing fast web browsing capabilities.

Last year, we met an iteration of this next device while it proudly flaunted the status of a Windows Phone 7-enabled handset. Now, the Dell Venue has been refashioned with the Froyo brand and a 4.1-inch AMOLED Gorilla Glass touchscreen as well as a host of multimedia features. This offering supports Flash 10.1 and is proficient for capturing stunning images with its 8MP camera. Enclosed in a sleek noir curvaceous cover, it splashes superior-quality graphics on the upgraded Dell user interface. The Dell venue is one of our favorites in the 10 top smartphones race.

Every time we hear about the ‘slim and trendy’ look of a handset, our mind runs away to fashion weeks and ramp models. As you glance over these gadgets, it comes back right where it should be. The penultimate product in this roster is another sleek and gorgeous treat dubbed Sony Ericsson Xperia Arc. A part of the rumor mill for quite some time, it seemingly has grabbed more eyeballs than ever following the event. Running on a MSM8255 processor at 1GHz with Adreno 205, it shows off a 4.2-inch capacitive touchscreen Reality Display and is powered by Gingerbread. Loaded with an 8MP camera, it stretches out geo-tagging, 720p HD video recording and more. In addition, the gizmo supports 3D games, aGPS, Bluetooth and HDMI. The array of features that this handset packs got the Xperia Arc an entry in our top smartphones list.

Though Vizio has been a member of the tech community for a long time, it has just carved in-roads into the smartphone terrain with the Via Phone. The company has stuck to basics by integrating a 4-inch display, 802.11n Wi-Fi and Bluetooth connectivity. Fueled by a 1GHz processor, the product also sports an HDMI output port and a microSD card slot for expanding its memory space. Offering dual cameras for freezing impromptu moments, it can record HD-quality videos. Like almost every other handset in the realm, this one too runs on the Android platform while it has also been implanted with a GPS system. The latter assimilates with a built-in IR blaster, helping users to convert it from a smartphone to a universal remote control app.

To summarize the whole affair, there was 4G in the CES 2011 air. The majority of top smartphones which surfaced at the event boasted of their advanced configurations and attributes. Whether these gizmos will make a splash as huge as their hype is yet to be seen. With so many feature-loaded devices lined up for the oncoming months, we are eagerly looking forward to the rest of the year.