TechShout
Home Features Top 5 Gadget Rumors that have us Hooked

There’s no clear explanation as to why the general human population tends to prick up the ear and quickly drop the dazed expression upon hearing the word ‘rumor’. Maybe it has something to do with the anticipation created by reports that are difficult to deny and therefore a possibility in the future. It’s like waiting at the table for the Pizza Margherita we’ve ordered while sniffing at wafts of imminent palate-satisfying goodness. Like any other place that accommodates wagging tongues with genial tolerance, the tech terrain is a place where rumors abound. We’re taking a look at some of the gadget rumors which have us hooked and simply ebullient about the unfolding months. 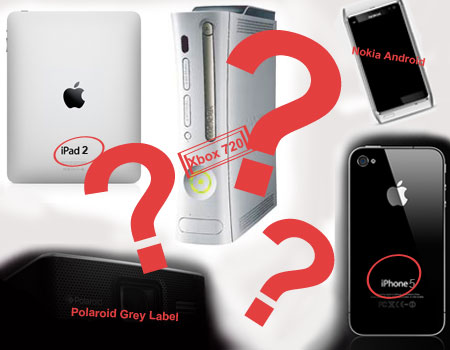 iPhone 5: Sherlock Holmes will no doubt be turning in his metaphorical grave upon hearing of facts being twisted to suit theories; but imagine Apple stopping at the iPhone 4. Why would anyone expect a company that has given us the iPhone, iPhone 2 and iPhone 3 to make the newest iteration of the device their last when it seems to be as popular as ever, if not more so. We’re just going to pretend like the company has a summer release in mind for the upcoming iPhone version as it always does. Amongst all the speculations surrounding the handset our favorite is the one about the new iPhone incorporating Near Field Communication (NFC) technology that could transform it into a credit or debit card. However, TechEye doesn’t seem very convinced about Apple introducing NFC into the very next iPhone since the company had previously filed patents involving this technology and airline boarding pass iTravel as also an iPhone and an iPod controller integrating NFC. Another addition to the juicy tidbit about the company’s interest in NFC comes from NFC World conjectures about Apple hiring Benjamin Vigier, an expert in the said field, as product manager for mobile commerce.

Xbox 720: This one has been going around for ages, so try and reign in the gaming buff’s enthusiasm for a revamped Xbox offering from Microsoft. The company did not seem to have plans for a new Xbox in order to reinvent their almost half a decade old gaming system in between Kinect and Games for Windows Marketplace last year. Now that the year of the gaming peripheral add-ons is behind us, the company may hopefully have a major surprise for us by name of an Xbox 720 unit. KitGuru has a few surmises about the likely successor to the current Xbox version, though 2012 is expected to be the achievable year of launch. Even if Microsoft’s history with Intel and Nvidia is ignored, the company is obviously going to take the success of the current Xbox 360 into accord while considering the brand of graphics it will use for the alleged Xbox descendant. It could mean that Microsoft will pick AMD Fusion II graphics for the Xbox 720. Unfortunately, renderings of the device that have surfaced so far are purely the works of inventive minds.

iPad 2: We have more than one gadget rumor about an Apple device that’s slated to hit us before the year draws to a close. When Apple turned out its bag of goodies to reveal the iPad, there were a lot of people saying, “Hey, where’s the camera and Flash support?” The inevitable new version of the tablet could offer a FaceTime camera for video chats according to new industrial designs surfaced from China’s Patent and Trademark Office by Patently Apple. In spite of contrary opinion arguing that it could be the iPad’s light sensor, a second report about the landscape docking mode seems to back the embedded camera notion. Thinq.co.uk added some bits of interest to the stories by talking about Brian White, Ticonderoga Securities, who cited that an iPad mini is in the pipeline. What’s more, Apple is expected to source baseband chips for the next-generation iPad and iPhone devices from Qualcomm according to AppleInsider.

Polaroid instant camera: Where did the instant camera go wrong when almost everything we do today caters to the impatient shades of our personality? Take anything from shortened URLs to TV dinner for instance. Instant cameras may not be a thing of the past as yet, but few people will know anyone who actually owns one. There’s a teaser originating from the Polaroid website about a special event to be hosted by the said company at the CES 2011 in honor of the mysterious Polaroid Grey Label. The images appear to depict a sort of glorified instant camera waiting in the wings for the show to begin. The squarish device even seems to have a slot running along the entire length of the chassis’ front base. We’re wondering if this device will indeed cater to regular citizens proclaiming a love for photography with instantaneous tangible results popping out of a slot. That’s one fetish that digital cameras cannot gratify since a lot of people tend to transfer pictures shot through digicams onto PCs and then forget all about them. At least we’re not going to suffer a long and indefinite wait before this Polaroid device comes out.

Nokia smartphone not running Symbian: We live in an age where reasoning pervades the nooks and crannies and good business sense needs it to survive. Nokia can boast about having the biggest market share in the mobile OS category with their Symbian platform for now. But Gartner’s September release about the mobile OS segment claims that Android can be expected to wrestle with Symbian over the number one position by 2014. Add in the fact that the Samsung Mobile Innovator site had already warned about the Symbian support service’s discontinuation with effect from December 31, 2010. And a vision of an Android-powered Nokia handset is starting to take solid form before our very eyes. Of course, there are other platforms in the market upon which the company could choose to serve up a non-Symbian phone, though it’ll be hard to explain why anyone wouldn’t want to bet on the projected winner. We could probably prop up the theory on Watts Martin, Nokia ex-employee, nixing stories of a Nokia phone running Windows Phone 7 instead of MeeGo or Symbian as reported by Wired. At the same time, we do witness unpredictable news emerging from Nokia quarters; like the transitioning of the Symbian Foundation to a licensing body. The official Symbian blog declared that the platform’s source code will not remain openly accessible and a number of the operations and services offered to the Symbian Community have been canned. The Android OS, on the other hand, thrives on the fact that’s it completely open source.

The CES will undoubtedly bring with it a bunch of interesting gadgets this year. What we’ve covered are not exactly the most anticipated gizmos of 2010 like the BlackBerry Playbook, the Nintendo 3DS or the Acer internet tablet, to name a few. Following the scent of rumors that could possibly materialize this year because they didn’t already do so in 2010 is mostly what we’ve been doing.

DJI Osmo is quick to enter India, much to filmmakers’ delight