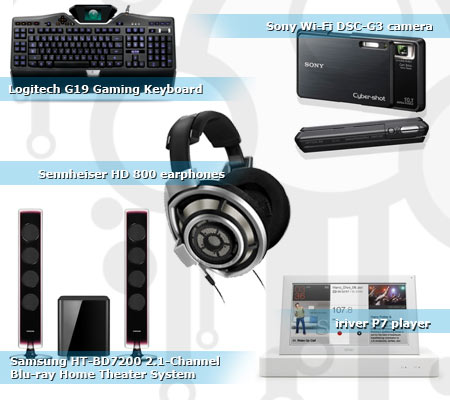 Technology, whether medical, constructive or state-of-the-art has certainly evolved with time. While some in the past year chose to use technology as a means to destroy a nation through terror attacks, smart chaps on the other end of the globe decided to flaunt their technology in the New Year through innovative and intelligent devices at the Consumer Electronics Show 2009 (CES).

Held from January 8 to January 11, the CES 2009 lasted just 4 days. However the event definitely managed to give us technology lovers some soul-stirring devices. This year at the CES, gadget freaks were thrilled to lay their hands on some really innovative products that we think should rock 2009. The products don’t just manage to use technology to the best of their advantage, but they also leave us in awe for sheer use of intelligence. So we bring to you a list of which we think are the top 10 gadgets that were displayed at one of world’s largest technology affairs.

1. HP TouchSmart dx9000 Desktop PC: Touch these days is a technology that hasn’t been left ‘untouched’ by practically any device manufacturer. We think a product at the CES that used the touch technology to the best of its capabilities is the HP TouchSmart dx9000 PC. As the name suggests, the desktop PC is enabled with touch functionality and will certainly catch your eye with its sleek design. The novel PC incorporates a 22” high-def widescreen display along with other features like Intel Core 2 Duo Processor and HD support. The PC packs in the HP TouchSmart software which has been particularly optimized for touch interactions. The touch enabled all-in–one desktop PC is also available in a 25.5” display option. While the 22” display will cost around $1,199, the 25” HP TouchSmart Desktop will cost around $1799.99.

2. Sony Vaio P series notebook: We can certainly say that the Sony Vaio P series notebook was one of the most awaited products of 2009. The gadget created quite a rage in the technology terrain once it was launched. The highlight of the P notebook is its small form factor that resembles a mobile phone. The Vaio P series lifestyle PC has an 8” 1600 x 768, LED backlit 8-inch ultra-wide diagonal display and combines Sony’s XBRITE-ECO LCD technology with some great functionality. Available in many colors, namely garnet red, emerald green, onyx black, crystal white and classic black, the notebook is powered by the Windows Vista OS and weighs just about 1.4 pounds. Lasting about 4 hours in battery life, the VAIO P Series Lifestyle PC comes for a starting price of $899.99.

3. Palm Pre smart phone: While smart phones may have been the talk of the town in the past year, we think not too many mobile phones managed to leave an impression at the CES. Though one device that seemed to catch the eye of practically one and all was Palm’s novel Pre smartphone that came bundled in with a new platform called webOS. With a large 3.1” HVGA touch screen, the phone offers a host of connectivity options too including Wi-Fi and Bluetooth. Equipped with a 3 mega pixel camera, the Palm Pre boasts of 8 GB internal storage. While we have no updates on the pricing details, the Palm Pre smartphone is expected to launch exclusively through Sprint in Q1 of 2009.

5. Samsung BD-P4600 Wall-Mountable Blu-ray Player: The next device which we think caught the fantasy of many at the CES 2009 in the home entertainment category is Samsung’s BD-6400 Blu-ray player. Adorning a stylish form factor, the player bundles in many functions that should excite multimedia enthusiasts. Dressed in a piano black design with ruby accents on the edges, the Samsung BD6400 is just about 1.5” in thickness. Offering complete support for HD 1080p, the Blu-ray player includes many advanced features that make it stand out in the crowd. To top it, the BD-6400 Blu-ray player can be mounted on a wall at a 25 degree angle thanks to its distinct stand. There is no word yet on the price or availability of this distinguished device. 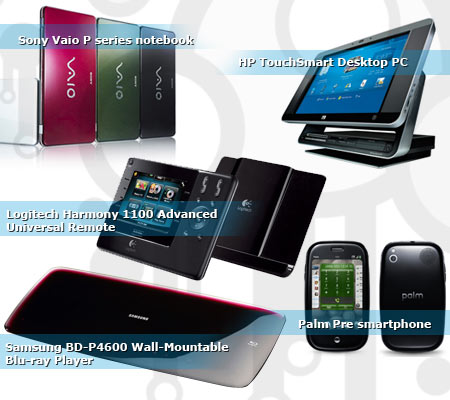 6. Samsung HT-BD7200 2.1-Channel Blu-ray Home Theater System: Besides the Blu-ray player, Samsung also showed off a new home theatre system called the HT-BD7200. We think it manages to stand out in the crowd of the many home entertainment systems revealed thanks to its stylish design. Adorning Samsung’s signature ToC design accents, the system is astonishingly just 2.6” deep. The ultra-cool home entertainment system also supports an iPod dock besides offering compatibility to the BD-Live technology. The Blu-ray system boasts of a 5.1 channel surround sound that offers a 1000W output. With support for low power consumption, the Blu-ray home theater system also includes an improved amplifier engine. There are no details on the price or availability of the Samsung HT-BD7200 Home Theater System.

7. Logitech G19 Gaming Keyboard: The CES also had loads in store for gaming enthusiasts. One such gadget that seemed to have caught the fantasy of most gamers was the novel G19 Gaming Keyboard by Logitech. The keyboard is bundled with 12 fully programmable G-keys that offer 3-macros per key support. With a multi-key input functionality, the G19 keyboard is bound to enhance a gamer’s experience while playing on the computer. The keyboard also supports 2 USB ports and is compatible with both, Mac and Windows computer systems. The powerful keyboard should launch around March 2009 in Europe and US for an approximate price of $199.99.

8. Sony Wi-Fi DSC-G3 camera: While there were many exciting digital cameras launched at the CES, one that really grabbed our attention was Sony’s new Wi-Fi DSC-G3 cyber shot digital camera. A camera that is equipped with complete Wi-Fi enabled functionality, now that’s really cool! We think the digital camera reveals how technology is indeed enhancing at a sky rocketing pace. Besides the Wi-Fi connectivity option, features the camera wraps in include a 3.5” Xtra Fine LCD display, 10 MP image sensor, 4 GB internal memory and many other advanced image management tools. Dressed in black color, Sony’s super cool Wi-Fi DSC-G3 digital camera is up for grabs now at a price of around $500.

9. Sennheiser HD 800 earphones: Germans, we must say, are known to deliver some of the most innovative technologies. Doing just that, German based Sennheiser showed off their novel headphones called HD 800. The headphones are all ready to create a stir in the audio terrain thanks to their unique blend of technology and design materials. In a new open back ear cup design, the earphones will certainly excite dedicated audiophiles. Highlights of the new earphones is its large transducer that make the earphones more powerful while the Japanese Alcantara materials used for the ear pads increases the comfort factor of the earphones. The earphones are, however, heavy on the pocket costing around $1400 for a pair.

10. iriver P7 PMP: Finally, the CES 2009 also made way for many interesting MP3 players. Standing out in the crowd was the P7 PMP from iriver. The portable player wraps in many advanced features that should offer users the much needed functionality they yearn for in a music player. The best part about the player is that it will come in 4, 8 and 16 GB Nand Flash models with a microSD card slot. The P7 player is also more durable and adorns a sleek design. Sporting a 4.3” LCD, for users who are always on the move, the player wraps in 50 hours of audio playback. The P7 player will certainly catch the eye of many with its advanced functions like SRS WOW HD and 7 Preset EQ settings. No details on how much this smart PMP should cost, though we are hoping to see it come around soon.

So, as technology hungry fans keep looking for more, we hope to have satisfied at least some as far as gadgets at the CES are concerned. Users who still haven’t got over the CES 2009 hangover can stay tuned as there is a lot more in store for them. Though we are signing off for now, we promise to keep updating you with many such interesting stories.