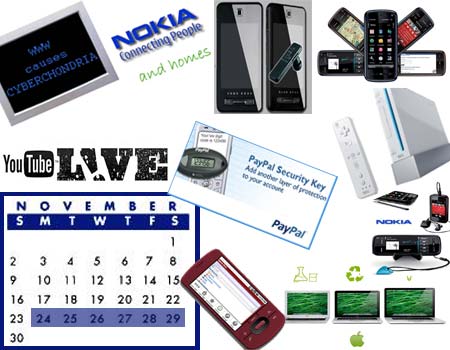 Well finally the month of November has ended and so has India seen the end of terror attacks today. Technology can either be used for good reasons or bad, we all know that by now. Again this week saw a range of new products and technologies stepping into the market. Here’s taking a glimpse of the most interesting topics of the week which we are presenting through our weekly section – Weekly News Roundup.

YouTube seems to be featuring in the news columns quite often these days. Every week they bring in a new innovation which brings in customization and personalization as per customer needs and requirements. This week YouTube brings in another creative and new wave in the world of internet with its Live Videos. As per the latest update YouTube happened to proudly broadcast the first official live streaming of its San Francisco event. That’s not all! The amount of viewers that YouTube received for this new service was also striking. As per TechCrunch, 700,000 viewers watched the YouTube Live at Japan. Now that’s a huge number and it proves the popularity and reputation of the site.

The technology zone cannot be complete without any mobile news. To complete the empty space here is some mobile phone news. Nokia now drops in another music phone into India’s basket. The latest and freshest mobile phone device is the Nokia 5800 XpressMusic which was recently launched in India. Nokia has tied-up with big Indian record labels like Tseries, Big Music, Yashraj and many more for the launch of the phone.

While the Nokia 5800 made its appearance in India, the phone also made its prominence felt in major select markets. The Nokia 5800 features the touch user interface which makes it easier for users to access their music, video and photos with one-touch Mediabar. The Phone also features functions which give the users the ease of use such as a contact bar that allows them to highlight, view digital history of recent text messages, emails, etc and a lot more.

As we mentioned earlier, technology can used for good or for bad, at this hour security has become the vital quotient. PayPal account holders can now be rest assured as PayPal announces a new security feature. This new security layer involves PayPal’s latest SMS Security key which will alert customers of their unique six-digit code via text message and that’s not all, PayPal will not charge for this service.

Another cherry on the icing for the mobile phone zone which is the release of the Opera Mini 4.2 and the new software will hop on to Android platform as well. While the Android O/S accepts this mobile web-browser, Opera flaunts off in pride as it becomes the first third party browser to work on Google’s Android based phones.

Mobile phones these days do not just limit themselves to a plain calling and texting services. Consumers demand for style and classy looks, they expect a brand name and its pleasing for them when they get a style icon’s name attaching on their mobile phone. Samsung now adds on the Hugo Boss title on to their mobile phone and shows off their F480 handset. The New Samsung phone flaunts off its 2.8 inch wide display screen which features the TouchWiz interface.

Now gaming goes a step ahead. Wii is proud to have crossed the 7 million mark in Japan. As per the latest update, the gaming console has sold more that 7 Million units in Japan alone. This proves its craze and popularity in the west. Looks like Nintendo’s Wii is even racing its close competitor – The Xbox 360.

After that we have one more news coming from Nokia which brings to us the developing of the Nokia Home Control Center. This new system will be a base for the advanced security, smart home solutions and household energy management systems. Users get to control their electric usage, switch devices on and off and keep a check on many other objects like camera, motion, temperature and much more. Now that’s one efficient technology that is set to arrive commercially by the end of 2009.

After all that list of long news, we call it a wrap-off for the day. As always we promise to return with a huge dosage of the latest news and shout-outs from the world of technology. Hope you have a relaxing weekend.