As the sun sets on the year 2008, we look at the best games of the year. Lots of games were eagerly anticipated this year. Though a small number of titles were delayed to 2009, a huge amount of games hit the shelves. The games that hit the shelves, some of them lived up to the expectations, while some turned out to be duds. 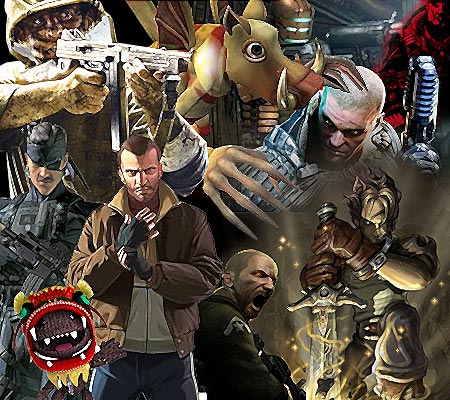 1. Though originally scheduled to hit the stores in October 2007, Grand Theft Auto IV was finally released in late April this year. The game got phenomenal reception and some even went on to compare GTA IV to the Godfather movies of yore. The action game was released for the Xbox 360 and the PS3 initially and the PC version was launched earlier this month.

2. From the time the PlayStation 3 was launched, most of the gamers were waiting for just one game. That game was Metal Gear Solid 4: Guns of the Patriots by Konami. The PS3 exclusive saw gamers finally get their dose of stealth action. MGS 4, the master piece from Hideo Kojima is surely one of the top games of 2008.

3. Gears Of War for the Xbox 360 was released nearly at the same time as the PS3 and Wii were launched. The shooter proved to be very popular with the Xbox 360 gamers (as Microsoft and Epic Games had anticipated). Well, the gamers wanted more and they obliged with announcing Gears Of War 2. The sequel was launched in November this year and has proved quite popular with the crowd.

4. If Xbox 360 had Gears Of War, two years ago, Sony too had Resistance: Fall Of Man for the PS3. Just like Microsoft, Sony chose to release the sequel to the first person shooter in November this year. Well, Resistance 2 released a few weeks ago and the PS3 gamers obliged as the game has gone on to sell lots and lots of copies.

5. Microsoft is hated for the dreaded red ring of death but then you have to accept it that they have got the best marketing team as well as Cliff Bleszinski and Peter Molyneux. The latter was roped in to create Fable II, an action role-playing game. The game is a sequel to the original Fable game that was launched way back in 2004. Well, Fable II released in October 2008 and managed to captivate many a gamer. The RPG is surely one of the best games of 2008.

6. If Nintendo’s motto was to get casual to attract the non-core gamers, then it seems that maxim rubbed of on Sony too, sort of. At GDC last year, LittleBigPlanet was announced for the PS3. The game was developed by Media Molecule but many chose to call it more of a platform rather than a game. A controversy did surround the platformer when it was going to be released but Sony sorted it out and now LittleBigPlanet has gone on to sell more than a million copies.

7. It’s been nearly two years since the three consoles, PS3, Wii and Xbox 360 have been released. It was apparently being said that PC gaming was in disarray. But there was one PC game which everyone was waiting for eagerly. That one game was Spore. The simulation game released in September and swiftly crossed the million copies mark. Though many are still calling the game a disappointment, we feel Spore has provided gamers with an enthralling experience.

8. When COD 4 was announced, fans were shocked to know that they were taking the series into the future. However, the next game in the series went back to World War II. Call Of Duty: World At War was released in November this year and quickly became a favorite of the Call Of Duty fans. The first-person shooter has great gameplay coupled with amazing graphics.

9. Yes, it is 2008 and we still have PC exclusives, which apparently could turn out to be a great thing! Back in September this year, Crytek and Electronic Arts teamed up and launched Crysis: Warhead. Though not a sequel, the PC-exclusive FPS tells the story of Sergeant Michael “Psycho” Sykes and the events that took place on the other side of the island. The game was quite popular with the PC gamers in 2008.

10. The survival horror genre is pretty big and Capcom has been ruling it since the day they churned out the first Resident Evil game some twelve years ago. But how could EA be left behind? Well, 2008 saw them release Dead Space, a survival horror game for the PS3, Xbox 360 and the PC platforms. The third person shooter was critically acclaimed for the gameplay and the gamers too loved the Ishimura, the Necromorphs and Isaac Clarke as well as the weapons.