TechShout
Home Features Virgin Comics on the way to resurrecting Comic Generation with its presence... 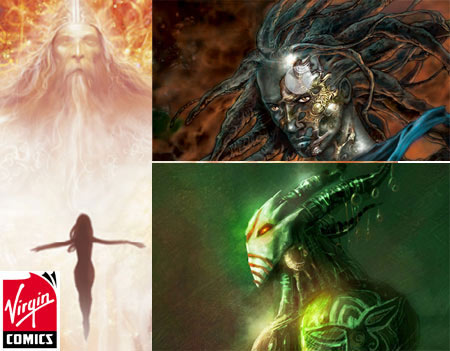 Each one of us must have gone through the comic book phase with the most memorable ones being ‘Captain Marvel’, ‘The Phantom’, ‘Tin Tin’ and the ‘Asterix and Obelix’ series. These old-school comics surely made for a great read.

However in recent years, the youth in India and perhaps else where in the world too have lost interest in comics. The joys that one gets from tearing open the cover of a brand new comic to discover a whole new world of color has surely been lost along the way.

This could possibly be due to easy Internet access, exposure to newer lifestyles and the forgotten joys derived from simple pleasures. But, like a ray of sunlight in a dull sky, Virgin Comics has successfully managed to rekindle this art with hit titles like Ramayan 3392 AD, Shakti, Devi, The Sadhu and Virulents.

Virgin Comics produces comic books complete with compelling story lines, interesting comic heroes, and good graphics to match. They are made of great storylines that take inspiration from the mystic and mythic side of India, interesting artwork and great characters. It certainly is no wonder then that Virgin Comics is on the way to resurrecting the comic generation.

Virgin Comics India which has its head office in Bangalore, is an amalgamation of creative, innovative and opportunistic minds such as Deepak Chopra, Shekhar Kapur, Suresh Seetharaman (President of Virgin Comics), Gotham Chopra (Chief Creative Officer) and Sharad Devarajan (CEO & Publisher). The actual comic book creators – the writers, sketchers and letterers come in next. 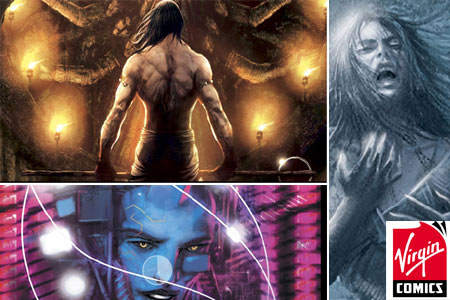 We couldn’t resist contacting the creative lot at Virgin Comics for a heads up on the colorful world of comics. Here is an exclusive interview with Mr. Suresh Seetharaman, President of Virgin Comics.

TS: Virgin Comics creates graphic novels based on mythology. What are the key factors that make them interesting?

SS: Good Stories are Good stories. Mythology can be a great inspirations or platforms to create new original stories.

TS: Virgin (Richard Branson) formed a collaboration with Deepak Chopra and Shekhar Kapur. Was this collaboration formed solely because the comic generation was slowly dying out?

SS: We are in the business of Entertainment. All our stories incubate as ideas in the Comic book format. These ideas are designed from the conception stage to have the potential to be made into Movies, Animation, Games and Merchandising.

TS: How well has Virgin Comics been received in the Indian market?

SS: Since its launch a few months ago, every issue has sold out in most places. I guess that’s a statement to people’s response.

TS: Creativity knows no bounds when it comes to creating comics. Could you let our readers know what goes into making them?

SS: To start with, you must have a great desire to tell a story. If you are that passionate about it, chances are it will not just remain an idea but take a form that is tangible and visible.

TS: How long does it take to create a single comic? For instance, how long did Ramayan 3392 A.D. take to complete?

SS: It takes time to get the story right, anywhere from one month to three months. While this is evolving the character design, the environments and other visual detailing are done alongside. Then to create a comic book it takes a month to 45 days per comic book.

TS: Usually, how many persons are involved in the creation of a single comic?

SS: A Writer, a Penciller, a person to then do the Coloring on the pencils, a letterer who puts in the text and the speech bubbles and the Editor who orchestrates the whole process. So it takes as least a team of 5 to 7 persons to create a book.

TS: We noticed that the artwork of Virgin comics is colorful, sometimes dark but eye-catching. Do the same artists work on all of Virgin’s Comics or do they keep changing from time to time?

SS: Yes, some titles are a bit dark. We also have more that is soon coming that is not so dark. Regarding the Artists, they work on many titles that Virgin Comics produces.

TS: Does one have to pay a price to download them online? How does this digital format work for Virgin Comics?

SS: Currently we share a few sample pages of each of our titles for free viewing. You don’t have to pay anything for viewing. The idea of sharing or downloading the complete book is yet to happen.

TS: Ramayan has been adapted into the comic format in a very smooth manner. What has been the main reason for such an adaptation of an Indian epic story?

SS: Ramayan is an inspiration. Our story is set in the year 3392A.D. As a story it lends itself lot of opportunities to build upon. I guess we needed to keep it simple. This helps people in general to read and understand the essence of it easily.

TS: An MMO Game based on Ramayan 3392 AD is being developed by Virgin Comics together with Sony. Tell us a little more about that.

SS: It is really a great partnership with Sony to take a brand like Ramayan 3392 A.D. on to a MMORPG online game. It is a huge project and highly complex. It would take 2 to 3 years before the game is ready. There are a lot of professional people involved from both the sides dedicated to producing a great gaming experience. This is what we can say for the moment on this.

TS: Can we expect to see Ramayan 3392 AD- The Movie anytime soon?

SS: I am sure we want that to happen.

TS: Considering that Virgin Comics has spurned a whole range of other creations in the form of games, mobisodes, fine art prints and graphic novels, do you’ll have any plans to introduce merchandise on the same?

SS: Absolutely. That is part of our business. This will soon happen.

TS: Does Virgin Comics have any plans of making a graphic film based on their comics?

SS: 100%. We have 3 movies that are being made into movies very soon from the comics that have been created.

TS: Virgin Comics is set to launch a comic/graphic novel based on Jenna Jameson, tell us something about it. How did you come up with this idea?

SS: She is a celebrity in her own right. She has a huge following and she has to story to tell. We feel it will make a great story and here we are creating one together.

TS: Tell us something about Virgin’s Celebrity Voices Line. Who all are involved in this project?

SS: The voices line of comics is stories from famous people and their ideas. It could be from anyone who is a famous person in whichever field he or she might be from.

TS: Is Virgin Comics connected in any way to Gotham Comics?

SS: No. They are 2 separate companies. Virgin is a content creator and Gotham is in the business of distribution.

TS: Does Virgin Comics plan to open an office in Mumbai?

SS: Soon in all Major Metros.

TS: Does Virgin Comics have anything big in store for Indian readers?

SS: All the time. Will keep you informed as they happen.