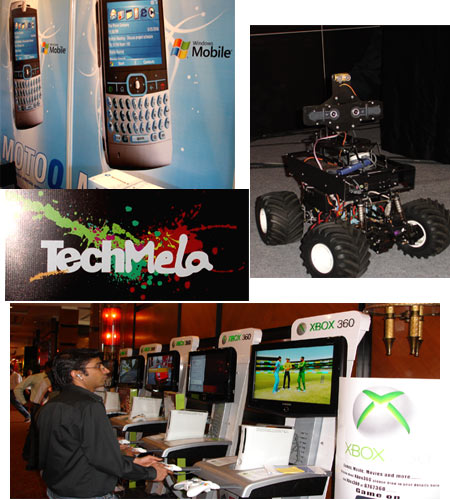 India has been at the center of the technology world from the time the Americans opened their doors to the highly qualified Indian engineers. However, that was only limited to the word of software coding. But slowly and steadily all that is changing as major firms are also using Indian expertise to carry out research related to hardware.

When we got an invitation to the TechMela event by Microsoft, we were smiling from one end of the ear to the other! I was assigned to go on June 15! My work-mates had gone on the inaugural day where they saw the Of one commercial as well as heard the speech by Sam Pitroda, one of the best known Indian VCs. So, on Friday morning I somehow tackled the dreaded traffic of Andheri East and managed to reach Hotel Renaissance in Powai. I was early (as usual) and instead of waiting for my fellow journalist, I decided to have a look around at the stalls. The robotics conference was still an hour away!

First up, I had to register and after getting a card which had a big “PRESS” written on it, I made my way in! The volunteers were helpful and they directed me towards the right. There, the first stall I encountered was the Motorola one, which had a very unusual phone. On inquiring, they told me that this was not exactly directed at the consumers. However, he told me to meet his booth mate who was showing off the brand new MOTOQ. I can say I was impressed but was surprised as Motorola used Windows OS for the phone. It has previously used Linux for one of its phones. It is a good thing that the American mobile phone maker is using both the operating systems for their mobile phones to get best of both the worlds.

Next up was the Nortel stall and then the stall which was displaying VIA chips. Then I went deep in to the right alley, which had several huge doors. It was behind these doors where various stalwarts of the tech industry were sharing their knowledge and experience. I still had time and so I thought why not go further in and I was happy I decided to do that as something dark green and white caught my eye! There were five Xbox 360s set up for the techies to play with. There were banners of their newly released and forthcoming games like Forza Motorsport 2 and Vampire Rain. I was excited (hey… my forte is video gaming) that I would get my hands on FM 2. However, one could only play PGR 3, Yuvraj Singh and DOA 4. Anyway, I ended up playing PG3 for some time.

After which I decided it was time to check out the other stalls. So next up I went to the Texas Instruments stall where they had put up a product from their partners, Ittiam. When asked if they would also be making products for the consumers, they said that TI is mainly in to silicon but it works with partners to come out with devices for the consumers.

Then I went to the Microsoft Education booth where they had collaborated with NIIT to offer their certified courses. Then there was the Accenture stall and various other booths which were displaying services rather than gadgets. I realized it was time to go for the ‘Robotics – A Microsoft Story’ session by Vignesh Doraiswamy. By that time, even my fellow journalist had come. We went to the room and just before we sat in our seats, our eyes fell on a small robot. It reminded me of the Path Finder that was sent by NASA a few years ago to Mars. Well, we knew we were in for a tech treat soon. The conference soon started, Doraiswamy, who is a tech evangelist, spoke at length about the CCR and how the software development has evolved.

One of the things that he pointed out was that Microsoft has used tools which have made it easy for devices to talk within themselves. He gave the example of sensors too. Computers normally have only some sensors like keyboard and mouse from which the information is fed to it. However, a robot has many sensors and it makes it a little difficult to decipher all the information. But Microsoft Robotic Studio 1.5 makes it easy not only for the software developers, who are used to handling software codes but also students and people who are new to the world of technology. In fact, the software can simulate the behavior of the robot as that people won’t have to risk damaging their expensive robots while experimenting!

After that we got to actually see how the robots and the GUI work! The robot, which we saw earlier, is known as MAX or Mobile Autonomous Explorer. Mumbai-based tech firm L&T made it in collaboration with Microsoft. The demo was good as he showed how MAX can be programmed to find out a particular color and even go towards it. Something that I really found amazing was the graphics user interface of the robot. It could be controlled from a workstation and it was so easy to use. Anyone would be able to use the robot and the best part is that the simulation works on real-world physics and you can even disable or enable the physics feature. 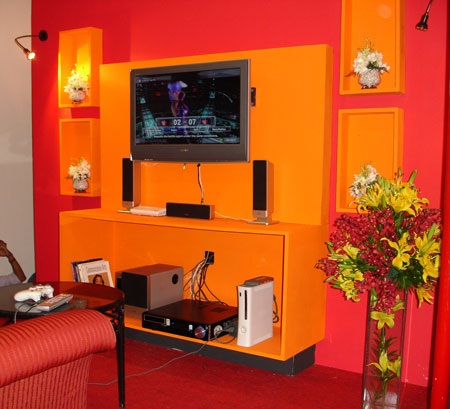 After the conference, for us it was time to go back to the TechShout.com HQ, but before that we decided to check out the Windows Live Scenario Showcase Zone. There they had setup up scenarios on the stage. One was Home, other was the On the Road and the last one was Office. In the Home showcase they showcased Media Center and the Xbox 360. The ‘On The Road’ one showcased the Dopod smartphone, a UMPC by Asus and the Zune media player. As for the Office, they had to re-schedule that part as they were out of time. However, they did announce a robots competition which they had kicked off sometime ago.

Well as for us, it was time to leave. I was sad to move out, but then I was happy too as I felt this was a great event and I hope more tech firms hold such events especially on the gizmos and hardware side!

And as always, a video is on its way soon.