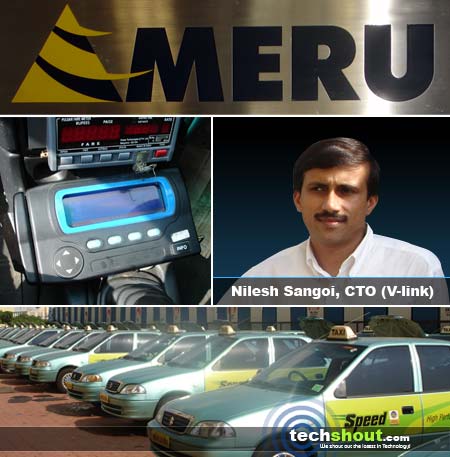 Green-colored Maruti Esteem taxis carrying ads of Radio City, are not new to Mumbai citizens. But very few of us actually know about its significance. Well these may seem as normal taxis, but they are actually GPS-enabled metered radio taxies. These private taxis are run by V-link primarily in Mumbai city.

Even today radio taxi is a whole new concept for Indians. But the idea is as easy as ordering a Pizza to your home.

All the interested traveler needs to do is simply call at Meru’s call center number on 44 22 44 22 to ask for the taxi. Thereafter the message is routed to a taxi driver and he goes and fetches the person from the pick up point.

The software of the Meru GPS service has been developed by Singapore Company and has been designed especially for the company’s taxi operations. MCT, a communicator between the call center and the driver, is based on GPS, but the data provided by the GPS is transmitted to the server through GPRS.

Meru taxis use GIS map, which is an altogether separate application. GPS provides the data via GPRS that are posted on the GIS map.

A majority of the clientele of the Meru taxis stems from call centers, people heading from airports, leading 5-star hotel visitors along with several corporate people.

Here’s what exactly happens at the call centre:

Taking an instance that the call centre receives a request for a pick up from a particular interested client waiting at the J.W.Marriot Hotel in Mumbai, the first thing that the call centre does is sends across a message to all the taxi drivers on the network. All the drivers are equipped with a GPS device in their vehicles that features a YES, NO and CANCEL option. If a driver is keen on being hired for that particular journey he goes ahead and clicks YES, similarly if another driver is either pre-occupied with another passenger then the driver may select the NO or the CANCEL option. Apart form these three basic buttons; the device also has options such as HELP, CALL where assistance is appropriately provided by the call center executives.

Currently Meru uses GPS to figure out the latitude and longitude of a place. It helps to plot the taxi location on the Map. It also provides speed of the vehicle. The basic reason behind this system is to acquire more and more costumers and to track the driver while on the run, to communicate the address and other details through the MCT computer box in the taxi. 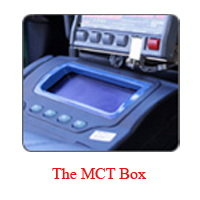 Let’s see how the system works:

First and foremost, a GPS device (MCT Box) is built-in the taxi, featuring a meter box (dashboard), built-in chip for GPS with an antenna. The GPS and meter data gets transmitted to the call center on the server via antenna.

A particular taxi is exclusively for the specified two or three drivers. A login and password has been pre-loaded to the GPS box. The driver has to punch in the five digit code on the system. The moment he logs in, the server at the call center gets the indication that this car is accessible to take passengers. The five digit code on the system is different for every driver and his respective vehicle. 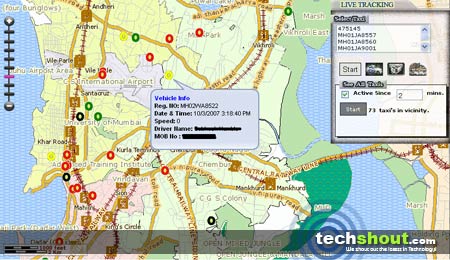 At the call center executives end, there will appear an application that consists of a map of any of the earlier mentioned six places. For instance, if it’s a Mumbai map, the map will comprise of pre-installed important destination names and four colored indicator such as yellow, green, red and black. Red indicates a car that is already loaded with a passenger, green indicates the car is vacant; yellow indicates that the car is waiting for a kerb (a local inhabitant of one of the six places) and black indicates logged-out cars.

Based on the login, the shift of the driver starts. For example, if two drivers have been appointed for one taxi (one for the day shift and other for the night), within the log in and log-out duration, the server automatically notes down the distance traveled by the driver along with the number of kilometers covered to pick up the customer. As soon as he logs out, the detail of meter, the kilometer covered and the money earned by the driver is automatically gets stored into the server through the antenna.
We do agree that this undoubtedly is a useful service and offers traveling with immense pleasure amalgamated well with the latest technology, but there were yet a few questions that we keen to further probe on. Such as, one needs to understand that India being a highly diverse country has a major non-English literate population, thus how would the Meru service be helpful and accessible to them. Secondly, unpredictable climatic and weather conditions is also something that most Indians have learnt to deal with, but how well-equipped would Meru’s software be to tackle this problem. And most importantly the facility is sans the facility of a map or voice facility on the screen of the device. Thus, the detail of traffic jams, diversion will not be available on this system.

TechShout got an opportunity to speak with Nilesh Sangoi, CTO of Meru Taxis. Speaking about the language issue, he stated, “At present, the system only supports English. India being a diverse country; we surely have plans in mind to come up with such a software that will bring regional linguistic versions of the device. We are waiting for a proper opportunity to explore the idea, which requires different software on the whole. If we get a source for the same, the technology with special regional languages pre-installed will be launched soon. Various languages fonts need to be installed before we come up with the version. We actually hire drivers who know basic English and can operate the device.”

Further touching on the bad weather problem, he elucidated, “Meru hasn’t experienced anything negative in terms of bad weather. GPS is a very stable and matured technology, whereas GPRS do have their shares of problems which affect the technology, but its getting stable. We spoke to telecom partners and the issues were resolved.”

About the lack of map and voice facility, Sangoi noted, “This GPS device does not feature a map screen. Thus, the detail of traffic jams, diversion will not be available on this system.” Adding, “The current GPS boxes are not capable of installing maps. But high-end boxes are available in foreign markets. Generally, for a taxi business it is not required.” He further continued, “To get the software into the product, we need to talk to traffic police to get traffic patterns. Over a period of time, we will surely look forward for the same.”

According to Sangoi, the customer’s response is very good. V-link has not really gone ahead and advertised about this unique Meru taxi service. However, the company first wants to reach a certain height and then go ahead and publicize the product.

Currently V-link owns 150 taxis and they plan to expand and bring 100 more taxis within a month’s time. The target is to have up to 1000 taxis by March 2008. Over a period of 2 years, Meru plans to achieve 10,000 taxis in the country. The future product in taxis, Meru is working on to provide a facility to accept credit-cards and pre-paid cards. The gadget for the same will be built-in to the taxis. By the end of this year, the taxis will also be introduced in Delhi too.

Interestingly, the fare structure prescribed by the Department of Transport, Government of Maharashtra currently is Rs. 15 for minimum distance, which is pretty reasonable, keeping in mind that the normal non-AC taxis cost as much as Rs. 13 for minimum distance. Perhaps further revenue may be coming through advertising means!

This is surely a new and novel concept, keeping in mind that it offers immense comfort along with the safety of not getting tricked by some weird street-smart who literally ends up taking you for a ride!