There has been much talk about a second generation Motorola Moto E smartphone and a report has also claimed to have seen the actual device, but couldn’t get images of it. Well, that was bound to happen sooner or later and we may have just gotten the first glimpse of the handset.

Based on the image posted by Android Police (see below), it’s clear that the second generation Motorola Moto E will look quite similar to its predecessor. The main difference is that the speaker grille from the lower-front panel has been removed and there’s now a secondary snapper accompanying the display. 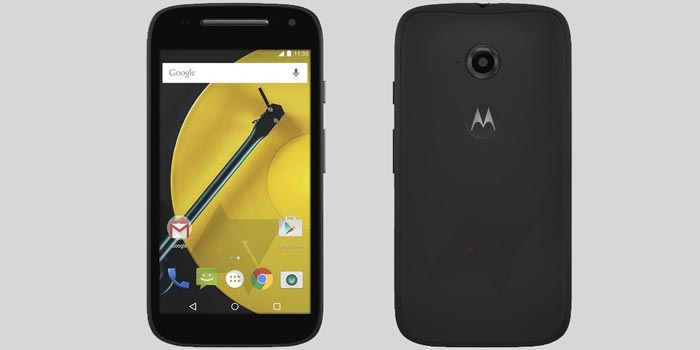 There’s no word on what sensor Motorola has employed on the front, but it’ll most likely be a VGA shooter or rated under 2MP. The display size is said to have been increased to 4.5n inches with the same qHD 960 x 540 pixel resolution and of course, there will be Gorilla Glass 3 just like in the current handset.

Also read: Motorola will give you up to $140 off on purchases made through its online store

Additionally, it’s clearly visible from the interface that Android 5.0 Lollipop comes preloaded with the phone. The rear panel doesn’t look to have changed at all and we suspect that Motorola has used the same 5MP camera for the handset. Well, it could have at least thrown in an LED flash and hopefully the main sensor has auto-focus.

The alleged specs of the second generation Motorola Moto E are quite similar to the Moto E Styx handset which popped up in the UK a few days back and both phones could end up being one and the same. We’ll have to wait till the MWC 2015 to find out for sure though.