Father Shoots Son in the Head over Xbox 360 Argument 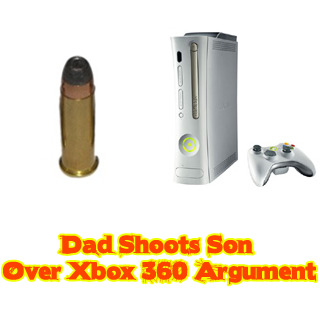 Shocked, upset, alarmed – these and several other emotions is what I went through when I got to know about this freak incident.

A 17-yearold teenager in Pennsylvania wanted his 60-year-old father named James Stanley Niedosik to have a look at his Xbox 360 gaming console for some strange reason, however the father declined to do the same. After which an argument took place, following which the son gave a rifle to his father and asked him to shoot him. And that’s exactly what the father did. The .22-caliber bullet is stuck in the young boy’s skull behind his ear, and currently he has been sedated in Lehigh Valley Hospital-Cedar Crest, whilst the father is in jail.

The incident took place at their home on Hazella Lane in Jackson Township.

Kotaku quoted Jeanie Niedosik – the boy’s mother, and the man’s ex-wife stating, “”I won’t know exactly what happened until I talk to [my son]. He’s incoherent yet; they have him heavily sedated. (My ex-husband) did the shooting but it was an accidental thing that took place.”

It would be highly immature to drop the blame on the 360 here. It was simply a channel that drove the father to perform something as ghastly as this. But what’s truly intriguing is what state of mind led James to something as drastic as this. Well, further investigations will surely throw some light on all these details.