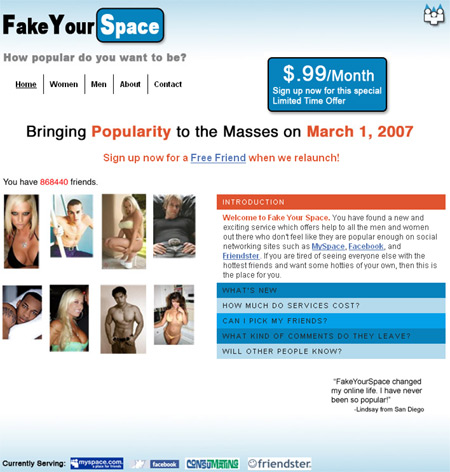 March 1 will see the launch of ‘FakeYourSpace.com’ – a companion service for MySpace, Friendster and Facebook that enables users to buy attractive “friends” for displaying on their profile pages.

“If you are tired of seeing everyone else with the hottest friends and want some hotties of your own, then this is the place for you,” reads a brief published on the company’s website.

A variety of scantily clad men and women are presented to the users, and each of these has fake profile pages registered with the popular social networking sites.

The sales pitch reads like that of an adult escort service: “We have a wide selection of men and women of all ethnic backgrounds.”

The profiles are developed by FakeYourSpace founder Brant Walker and his team, using photographs sourced from modeling agencies.

A monthly charge of 99 US cents rents one friend, who will leave the client two comments a week. Customers are even able to choose the exact wording of those comments, which are then displayed prominently on their MySpace, Friendster or Facebook profiles.

A graduate of Platt College, a graphics and multimedia specialty school in San Diego, Walker runs the site from his San Diego home with two employees. He said the idea came to him when he noticed, while browsing MySpace pages that “some people would have a lot of good-looking friends, and others didn’t.”

According to Walker, aged 26, this will lead others who come across your profile to believe you are more popular than you really are, and are friends with more attractive people.

A sole testimonial published on the FakeYourSpace website, written by “Lindsay from San Diego”, reads: “FakeYourSpace changed my online life. I have never been so popular!”

Actually the site was introduced late 2006, but The New York Times reported that business was put to a stop for the time being when iStockPhoto.com, which supplied photographs of models to the service, said FakeYourSpace had failed to comply with its licensing agreement.

It is believed that the company’s use of the photos wrongly implied the models endorsed the product.

The business re-launches on March 1 using pictures from new sources. In the mean time, a “free friend” is being offered to those who sign up to the FakeYourSpace mailing list.

Of the sites supported by FakeYourSpace, MySpace is by far the most popular among Australians.

According to traffic monitoring firm Hitwise, myspace.com was the sixth most popular website visited by Australians last month.

What surely remains to be seen is that is buying friends more worth than earning them in the true sense?