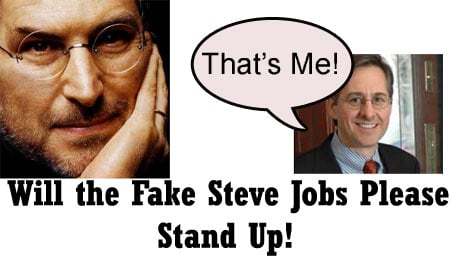 A blogger who calls himself “Fake Steve Jobs” revealed himself this Sunday as an editor of the well known Forbes business magazine. He came out with a parody of Apple’s chief executive called “The Secret Diary of Steve Jobs”.

Dan Lyons, a senior editor at Forbes admitted to writing under the pen name of ‘Fake Steve’, soon after a New York Times reporter found resemblances between the blog and Lyons’ published work and asked him whether he was behind this satire.

Yes Lyons’ blog reeks of satire, but it no doubt amused the tech industry at Silicon Valley.

Lyons told the Times that he had started the fake blog in 2006 only to poke fun at the lack of candidness that he noticed in a number of CEO blogs that were attracting the media’s attention.

It certainly is amazing that Lyons own blog did not attract media sleuths for over a year now. Now, that it has come under the media scanner, the blog has been read by leading industry figures such as Bill Gates.

Lyons said, “I was hoping to stay anonymous for a while longer but on the other hand I knew I couldn’t stay anonymous forever. It had to happen at some point. I hope that it doesn’t ruin the fun of the blog that people know who’s behind it.”

Lyons’ blog can be found at http://fakesteve.blogspot.com. And, Lyon has come to be known under various pen names such as ‘Fake Steve’, ‘FSJ’ and even ‘El Jobso’.

The blog openly terms Linux fans as “freetards”. He even signed of on one of the posts with the Indian salutation “namaste”. Lyons even used his adopted persona to poke fun at the reputation of the ‘real’ Steve Jobs branding him as a highly demanding, arrogant manager.

One of the posts on the Fake Steve Jobs blog goes like this: “The MBAs say you should set high standards, let people know what’s expected of them, and hold them to that. I do a little twist on that and say, hold people to an impossibly high standard, but here’s the twist — don’t tell them what that standard is. And fire them if they fall short.”

So infamously popular has the Fake Steve Jobs blog become that it has even spawned an upcoming satirical novel by Fake Steve. The book is called “Options” and will be out by November.

The fact that Lyons was unmasked in spite of going all out to keep his identity under wraps is the latest example of a case where the Internet has proven to be far less of an anonymous platform than it has long been assumed.