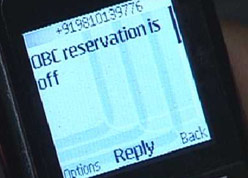 “OBC reservation is off”. Apparently, this is an SMS from Human Resource Development Minister Arjun Singh’s mobile number sent exclusively to CNN-IBN. But, the minister said he knows nothing about it and obviously never sent it.

Everyone has heard of websites and e-mail accounts being hacked. Now people could be sending messages from your cell phones and you probably wouldn’t even know! What seemed like a harmless prank could actually turn out to be a serious national security threat. This is exactly what appears to have has happened.

Patanjal Digantvyas, a 19-year-old from Ahmedabad, who is acquainted with this loophole in phone companies says, that all one has to do is to a website like communicator.clickatell.com that provides bulk SMS. Clickatell gives free demos, unlike most sites which are paid. A user is able to register for free and needs just one valid mobile number in India to receive the login code. Once the user has clicked on the ‘messaging link’, he would have to enter the sender’s and receiver’s phone numbers.

Absolutely no verification is required. Thus anyone can send messages in your name. The fact that there is an absence of any kind of verification makes this a threat to national security.

Furthermore, one doesn’t even need a computer for this, as one could even send an email from a cell phone to the ‘fake SMS’ website. What is interesting is the fact that neither the prank user nor the victim’s phone balance decreases. And the sender doesn’t even know that a message was sent using his number.

“In some mobiles, you do get the message centre number. From that the higher authorities must have a way to trace it,” Digantvyas said.

The police seem baffled, as they said that they have never received a case like this. “We’ve never received an official complaint but we’ve heard that such messages are doing the rounds lately,” Deputy IG of Police (CID-Crime), Gandhinagar, Anil Pratham said.
There is a lot of misuse than use in this cell phone SMS prank and can end up as a huge disaster.