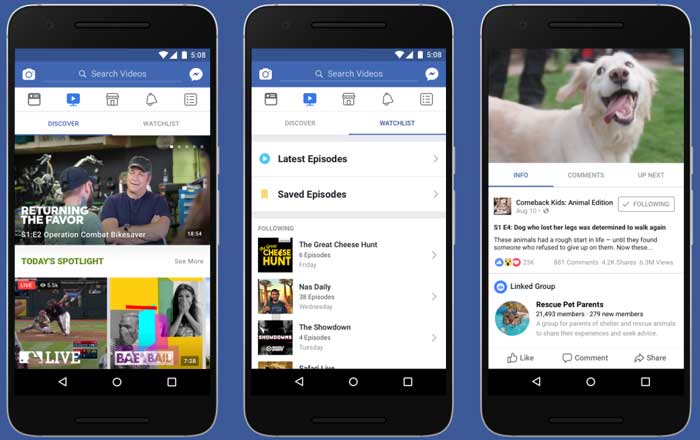 Facebook’s announced a brand new Watch platform for people to check out original content on its apps and website. The push has been rumored for months, with the company eager to expand into the overstuffed streaming video sector dominated by the likes of YouTube and Netflix.

Watch will feature Shows which are in turn made up of live or recorded episodes. It’s not exactly all traditional TV fare right now, with most of Facebook’s original programming centered on YouTube-like content like Tastemade’s Kitchen Little, a kid-centric cooking reality show, and Major League Baseball.

Personalities like Nas and Gabby Bernstein are also on board, hosting daily or live shows to connect with fans. Facebook is currently funding some shows to give the platform a leg-up in its early days, but plans to stop that eventually and earn money through ads in the long run.

Facebook is pitching Watch as a personalized experience that’s organized around providing a social way of watching TV. Sections include ‘Most Talked About,’ ‘What’s Making People Laugh,’ and ‘What Friends Are Watching.’ Comments will be open during a broadcast, with Facebook hoping this will bring about a communal atmosphere that’s missing from other streaming platforms.

Watch will only be available to a limited pool of people in the US on mobile, desktop, and Facebook’s TV apps at first. It’ll then expand into wider availability in the country over the course of the coming weeks. The firm hasn’t said anything about countries outside the US yet, which is understandable since it has to find its legs first before even thinking of worldwide expansion.