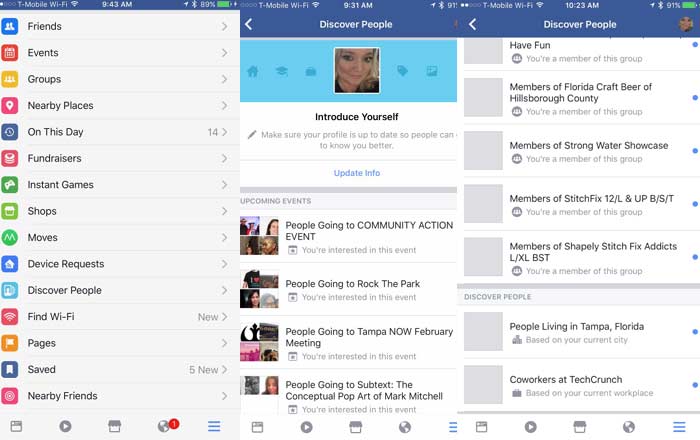 Facebook’s taking social media stalking to the next level with a new feature called Discover People for its Android and iOS users. The tool actually surfaced in Australia and New Zealand last year and looks to be spreading to individuals residing in the US now.

Discover People could be seen as a boon or invasion of privacy depending on a person’s preferences. It’s located within the navigation section of Facebook’s app and encourages them to update their profile with data like where they work and what city they live in, in addition to setting a featured photo.

Once this process is over and done with, Facebook will let users scroll through a list of upcoming events which they’re interested in and the individuals which are attending them. This is where things get interesting, since the section only showcases people members aren’t already friends with.

Also Read: Facebook video may make the leap to your TV

Other than events, Discover People also has a separate corner dedicated to highlighting users who have the same employer or stay in the same city. The feature can be seen as a networking tool in that light, letting members get acquainted with others who might share their interests or make new friends outside of their current circle.

Facebook has confirmed the facility’s existence to TechCrunch, adding that it hasn’t reached full availability as yet. It’s also promised that only public information will be shown in the profiles for the section. It sees the addition as a way for users to learn more about the people in their community when they’re new to a place or job.