Facebook’s been collecting your call and text logs for years

Facebook’s Cambridge Analytica scandal doesn’t look it’s going to die down anytime soon, no matter how many apologies CEO Mark Zuckerberg issues or newspaper ads the site runs. The controversy has prompted many people to investigate just what kind of data the website has on them.

A New Zealand man named Dylan McKay was one such user, downloading a copy of the data Facebook had collected about him over the years. To his surprise, he discovered that the site had his entire call history with his partner’s mother. Overall, the platform had about 2 years worth of phone call metadata from his Android handset, detailing names, numbers, and the length of each call.

As reported by Ars Technica, several other users claimed to have discovered similar troves of calling and messaging data. It seems a particular Android permission from the days before Android 4.1 Jelly Bean is to blame for this. Back then, if an app was allowed to read contacts, it would also gain access to call and message logs by default. 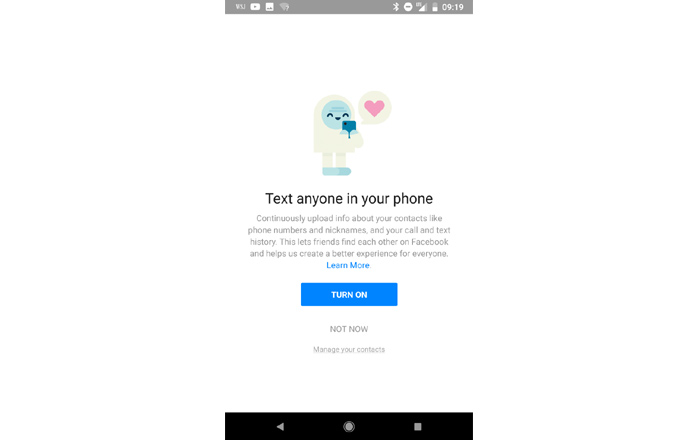 This changed in later versions of Android, but some apps could still bypass this up until Google finally killed version 4.0 in October 2017. This coincides with the last call metadata which Facebook had access to. To be clear, the company specifically started asking for permission to access call and SMS logs in recent versions of Messenger and Facebook Lite.

But this doesn’t address the years of access Facebook silently had to phone call metadata without explicitly asking permission for it. The social networking website has released a statement on the matter in the wake of the controversy, stating that call and text history logging is an opt-in feature.

This is true, but it wasn’t true until 2015 when the feature was introduced for Messenger. Plus, McKay told Ars Technica that he installed the app in 2015 without allowing it access to his call/SMS history. In spite of removing and reinstalling the app several times since then, he still found metadata up until July 2017.