News of Facebook working on a separate photo app to take on Snapchat came out just a week ago. Fresh evidence now reveals that the social media giant is in fact looking to take on its rival via Messenger in the near future.

This makes sense to a certain extent since Messenger already has an established user base which Facebook can take advantage of to drag people away from Snapchat. Twitter account @iOSAppChanges has now posted images of the former’s new disappearing messages feature which comes across as a blatant rip-off of the latter’s self-destruct one for images.

Based on the photos, Facebook gives users the option to automatically get rid of a message within a minute, 15 minutes, an hour, 4 hours, or a day. Snapchat only allows photos to stay alive for 10 seconds. Facebook’s flexibility in terms of time may just appeal to people who want a text or media to last longer than just the blink of an eye. 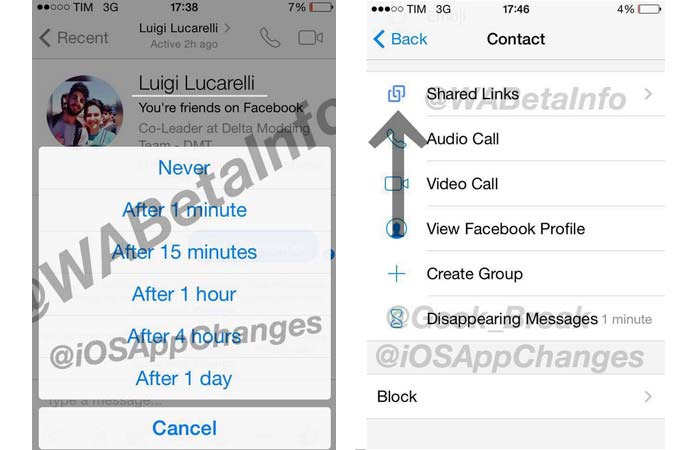 The disappearing messages tool could even attract security-conscious users who want to share sensitive personal data without having to worry about it getting into the wrong hands. Speaking of, Facebook has apparently added a hidden secret chats feature to Messenger for iOS version 67. The function came to light via a Pastebin page and is not available to regular users yet.

Secret chats basically makes sure a conversation is end-to-end encrypted and only takes place on a particular device for each participant. Facebook-owned WhatsApp recently kickstarted its own universal end-to-end encryption feature, so the new tool seems like a natural step forward for the parent company.

Disappearing messages and secret chats will probably hit Facebook Messenger soon. We’ll keep you informed the moment the new features are added to the app.